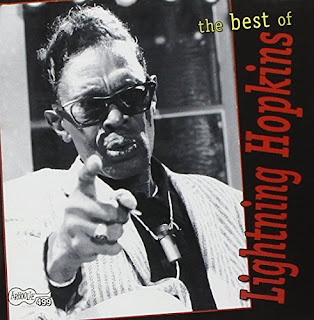 The legendary Lightnin’ Hopkins is a giant among Texas bluesmen, an important link between the early traditional blues of Blind Lemon Jefferson and highly-amped, rock-influenced guitar-slingers like Charlie Sexton and Stevie Ray Vaughan. Like many of his Chicago counterparts, Hopkins was often cast by labels in an R&B light, recording material with a full band and an eye on the black music charts. Where I feel Hopkins is at his best, however, is when he and his guitar are unaccompanied, Lightnin’ kicking out some dirty country blues.

Hopkins was a prolific recording artist, much like John Lee Hooker, spitting out sides for whatever record company was paying any particular week. Blues artists got paid when they recorded or performed live; royalties were seldom paid by the labels on the 78s that they spun out during the 1940s and ‘50s. During a career that spanned seven decades, Lightnin’ recorded for dozens of labels, including Gold Star, Aladdin, Jewel, and Modern. Pinning down any best of collection on Hopkins is like hunting down a snipe – you’re better off not trying in the first place. The best that you can hope for is to isolate several distinctive eras in the artist’s career and dig up recordings that represent his best efforts in that time and place. Once you’ve done that, you can simply buy Arhoolie’s The Best of Lightnin’ Hopkins.


There are several reasons to choose this set over the dozen or so other ‘best of’ collections that you’ll find on your local dealer’s shelf. Arhoolie founder Chris Strachwitz was a fan of Hopkins, and it was after seeing Lightnin’ perform live in 1959 that Strachwitz decided to form his own record label. Strachwitz recorded Lightnin’ several times during his career, and many of those recordings – especially the Texas Blues album – are considered bona fide blues classics. Many of the best of those tracks, recorded during the 1960s, are included on this disc. Finally, Arhoolie got their hands on the 78s that Hopkins recorded for the Houston-based Gold Star label from 1947-1950 and several of those sides, including a couple of unreleased songs, are included on The Best of Lightnin’ Hopkins.

Ultimately, however, the music is why you should check out this Arhoolie compilation. Hopkins had a distinctive vocal style and a quick-witted ability to reinvent his songs and lyrics as whim and wisdom dictated. His electrifying guitar style is without peer; you can hear echoes of Lightnin’s riffing in the work of Stevie Ray, Kenny Wayne Shepherd, Doyle Bramhall II and other blues-based rockers. This collection includes a fine cross-section of Lightnin’s career, from the magnificent country blues of songs like “Grosebeck Blues” and “Tim Moore’s Farm,” which sound like vintage 78s, to R&B flavored tunes like “Come On Baby.” Along the way, Lightnin’ steps up to the keyboard and invents zydeco (“Zolo Go”) and refines the 1960s-era protest song (“Please Settle In Vietnam”). Hopkins’ friendly vocals and blistering six-string wizardry are the stuff of legend, and the sound quality on The Best of Lightnin’ Hopkins – many of the songs appearing here on CD for the first time – benefits from top-notch production and lots of TLC.


For those unfamiliar with Lightnin’ Hopkins, this ‘best of’ compilation serves as a fine introduction to an important and influential artist. After you’ve whetted your appetite on this Arhoolie collection, might I suggest you pick up a copy of Texas Blues and the two-CD compilation The Complete Aladdin Recordings for a better overview of this magnificent blues legend’s career. You’ll be glad that you did... (Arhoolie Records, 2001)