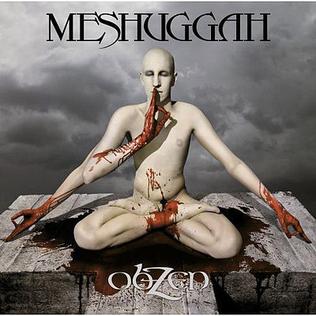 Displaying less of an egghead Einstein approach to their metallic onslaught, this time out finds Sweden’s Meshuggah – they of the mighty signature changes and predisposition towards formulaic improvisation – providing a welcome bludgeoning dominance to their normally scalpel-precise barnstorming. ObZen, thus, provides the best of all worlds for fans of the bombastic. Meshuggah slices-and-dices single notes unlike any metal outfit before or since, but with ObZen they add the soul-crushing dimension of hardcore HEAVINESS to their considerable arsenal.

A creepy, scraping riff and teetering cymbals kick off “Combustion,” as appropriately-named a song as you’ll experience this year, a blast-a-minute mindfuck of guttural vocals, blistering drumbeats and fretwork that will flay the skin from your bones before you know it. “Electric Red” ramps up the amps with powerful tribal rhythms, plodding discordant riffs and Jens Kidman’s gutted-pig vox. Treading dangerously close to doom-turf, the song’s down-tuned axes and stomping Killing Joke drumbeats are simply to die for…


If these first two songs set the stage for what will follow on ObZen, nothing could prepare the listener for the unrelenting barrage of noise-as-pain and pain-as-aural-pleasure that is to follow. Although Meshuggah’s technical mastery has long been established, the machine-precision and robotic chaos of ObZen is truly staggering. Drummer/songwriter Tomas Haake ventures away from the computer for many of these songs, proving acidic live skins that beat the hell out of any other metal posse plying their trade in these dark streets today.

Haake’s work on “Bleed” is outright scary, his bass drum bludgeoning the listener with ferocity that even Fenriz can’t muster, his machinegun rhythms complimented by the sting of Fredrik Thordendal’s flippant guitar solos, while Mårten Hagstrom’s rhythm guitarwork provides some of the strongest steel-beam construction that you’ll find in contemporary metal. The song is simply exhausting on so many levels, but satisfying in a way that non-metal fans could never understand. The title track offers more of the same, monster riffs and syncopated rhythms forever melded with tortured vocals and an innate sense of musical outrage.

The textbook poly-noodle of “Pineal Gland Optics” starts with a snaky recurring riff and modal synth signature before descending into Kidman’s own personal hell, his powerful vocals drowning amidst the rapidly-shifting quicksand of the song’s ultimate confusion. The six-string work here blisters-and-peels any surface close enough to be impacted by the scraping riffage and bonfire rhythms, and the vox are guaran-damn-teed to give you nightmares for a week. “Dancers to a Discordant System” offers more of the big-bore chalkboard formula of previous Meshuggah albums, providing fans of the band’s more scientific sound with some tasty integrated circuits to bite down on … though there’s nothing here to alienate lunkhead purists, either, Kidman’s death-throes vocals and Thordendal’s switchblade solos fulfilling the perceived math-to-metal quotient.


Altogether, Meshuggah’s sixth studio effort is a fine kettle of chaos, indeed, ObZen offering up plenty of everything that today’s young headbanger could ever desire. Although the album further showcases the band’s awestruck instrumental virtuosity and ability to change directions on a dime within a single song, there are also enough bone-crunching rhythms, surgical airstrike guitars, and city-destroying Godzilla bass lines to leave any listener a drooling mass of quivering cretinism…and what more could you ask for from any metal album? (Nuclear Blast Records, released May 15, 2012)

Review originally published by Dancing On the Edge blog