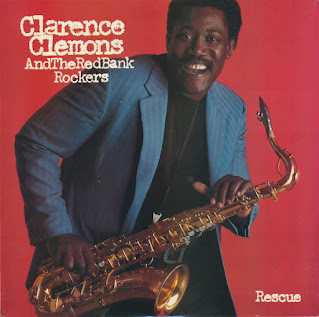 Yep, here’s another of Springsteen’s ultra-talented E Street Band steppin’ out to release his own solo album; this time it’s the ‘Big Man’ himself, Clarence Clemons and his ass-kickin’ Red Bank Rockers and a hell of a first album titled Rescue.

Clemons has assembled an awesome band on this collection of R&B shouters, including several members of the New York “Music Mafia” such as Desmond Child (co-writer of three songs here), Ralph Shuckett (producer of Ellen Shipley, as well as this LP), and backing vocalists Ellie Greenwich, Ellen Shipley, Rouge (Miriam Valle, Maria Vidal, and Diana Grasselli) and, you guessed it, Bruce himself…

Rescue kicks off with a “Nutbush City Limits” clone, “Jump Start My Heart.” A bit of a filler, perhaps, but then the grooves jump up and grabs ya by the ear when they jump into “Rock ‘N’ Roll DJ,” a smoker. A nightmare familiar to all of us is covered in “Money To the Rescue,” side one ending with the jumpin’ single “A Woman’s Got the Power.”

A slow, powerful “A Man In Love” opens side two, moving into “Heartache #99,” a tune so funky, so soulful, the damn thing drips. Springsteen throws another original number on here with “Savin’ Up,” and the whole party ends with the honker “Resurrection Shuffle.” Clemons’ sax sings through Rescue like a bird in flight, and J.T. Bowen’s vocals match the material heart to heart.

It's amazing that the best music being made in American today is being made by the small, albeit talented Springsteen family (Bruce himself, Gary “U.S.” Bonds, Little Steven & the Disciples of Soul, and the original Asbury Park party band, Southside Johnny & the Asbury Jukes and, now, Clarence Clemons). If you want the best release by a new group in 1983, snatch a copy of Rescue. (Columbia Records, 1983)