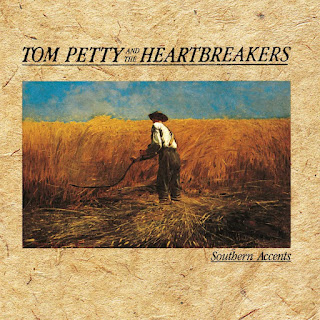 It can certainly be said that Springsteen’s commentary on the plight of the working class in last year’s Born In the U.S.A. not only made him a populist spokesman, but also appealed to a common denominator among several million record buyers. An observation could be made, though, that the mini-dramas presented on Born In the U.S.A., stories of America’s industrial decline, the deterioration of its cities, and the omnipresent Springsteen triad of cars, girls, and rock ‘n’ roll have their roots firmly placed in the factory atmosphere of the Northeast and Midwest.

This sets the stage for Southern Accents, Tom Petty’s Dixie born ‘n’ bred proclamation of Rebel pride. Petty is an artist whose style and influences are similar to those of Springsteen, so it should come as no surprise that Petty would develop a work such as Southern Accents. At its best, Southern Accents is adventurous, insightful, and reflective of the Southern experience. Petty takes more than a few risks, though, which makes this perhaps his most flawed work.


One of the chances that Petty takes is in his unlikely paring with Dave Stewart of Eurythmics on three of the album’s nine cuts. Although Stewart proved that he held a fine grasp of pop stylings during his stint with the Tourists, you won’t find an inkling of this influence on these songs. Stewart’s presence as co-producer and songwriting partner seems to force Petty and the straight-rockin’ Heartbreakers into an unnatural mold. “It Ain’t Nothin’ To Me” is the first of these collaborative efforts. Although interesting, lyrically, the musical accompaniment is a confused, discordant mish-mash of blaring horns and misused instruments. Trying to emulate a Stax/Memphis feel on the song, Petty would have been better off asking Booker T for advice … this is easily the worst song that Petty has ever recorded.

“Don’t Come Around Here No More,” the initial single release and the second collaboration, is a much better song. Petty’s talents take over, with Stewart’s influence shading the performance only a bit (mostly with the unusual addition of a sitar, it would seem). The lyrics are sparse and tightly-edited, the music ethereal and Petty’s vocals brilliant. The third cut done with Stewart, “Make It Better (Forget About Me),” is mere filler … easily forgettable.

The strongest two songs on Southern Accents are the two Confederate anthems: “Rebels” and the title cut, “Southern Accents.” Petty illustrates that not everyone has forgotten (or forgiven) the insults paid on the South over a hundred years ago; certainly not the legion of fierce young men to whom fast driving and hard drinking help combat the day-to-day grind of deadening, hard-ankle jobs. Generations have been born with resentment burning in their blood, a fact easily recognizable to Florida-born Petty: “even before my father’s father, they called us rebels, while they burned our corn fields, and left our cities leveled, I can still feel the eyes of those blue-bellied devils, when I’m walking ‘round at night through the concrete and metal…”

Much of the South, now called the “Sun Belt,” has become the new playground of the rich. More and more, as modern day carpetbaggers try to remake the South in their image, from the “concrete and metal” down to the destruction of Southern culture, Petty’s pride in his heritage becomes a battle cry: “there’s a Southern accent, where I come from, the young ‘uns call it country, the Yankees call it dumb, I got my own way of talkin’, but everything is done with a Southern accent where I come from.”

Both cuts are powerful statements, echoes of a mindset shared by artists and the alienated in the rapidly-integrated (by Northerners) “New South.” The remainder of the LP’s material is solid, TP-brand rock, including “Spike,” a satirical poke at the nihilistic “punk” lifestyle and dress. Perhaps “Johnny Reb,” in his gray uniform and proudly-worn “stars ‘n’ bars” was really the original punk … the Civil War certainly did its part in creating an aura of angst and frustration south of the Mason-Dixon line, long before economically-bankrupt British youth rediscovered the feeling in ’76 and imported the trend to the states, casting millions of bored, upper-crust youth into a stylistic frenzy of strange hairdos and leather/chains/studs they bought with father’s Visa card. Daddy’s little boys and girls needed only to look into their own backyard to find the roots of this phenomenon.


Even with its flaws, Southern Accents is among one of the year’s best … Petty’s artistic experimentation and the strongly-worded feelings placed in these songs, though sometimes missing their mark, still represent the most ambitious attempt since the landmark works of Lynyrd Skynyrd in creating an identity and pride in Southern roots. (MCA Records, 1985)

Review originally published in the Summer 1985 issue of Anthem: The Journal of (un)Popular Culture