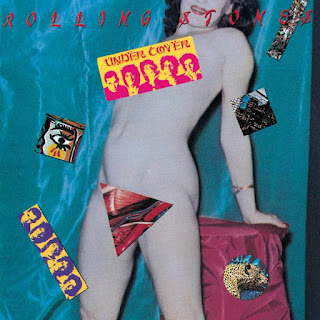 Mick the Boneman, Keef, and all of da boys have been billed as the “Greatest Fucking Rock ‘n’ Roll Band In Da Whole Wide World” for so long that we tend to take da boys for granted. The truth is, the Stones are the most flexible band, perhaps, in the world; like a psychotic chameleon, they’ve survived twenty years at the helm of the biggest bunch o’ misfits playin’ the most dangerous game in town – that’s rock ‘n’ roll to you, mister, and they’ve kept up with the changes in time like nobody’s biznis…

So now it’s damn near ’84, the year of Orwell’s worth nightmare (by the way, go back and read the damn book again; I know you haven’t picked it up since English Lit 101 but if you’ve half a brain, it’s scare the bejeebies out of ya!); and the Stones, fer da lova god, release a song with a political statement like “Undercover of the Night,” proving for once and fer all that there is life after forty, ya know.

The rest of the album ain’t too bad, either, Bunkie! “She’s So Hot” sorta flows offa yer turntable and inserts itself into your own bad ear; the reggae-influenced beat of “Feel On Baby” will shake, rattle and roll yer wisdom teeth; while on side numero dos, such little pretties as da super-funky “Too Much Blood” lay chill on yer spinal fluid. All in all, pretty potent stuff from a buncha guys old enough to be some of you reader’s fathers. After twenty-something odd years that have spanned three decades, I think the Stones have earned any title they’re given. Undercover retains their crown… (Rolling Stones Records, 1983)

Buy the CD from Amazon: The Rolling Stones’ Undercover
Posted by Rev. Keith A. Gordon at Friday, December 09, 2022