The Houserockers – originally called the Iron City Houserockers – should be a superstar band. Their hard-driving rock ‘n’ roll style, sharper than a straight-razor and stronger than a concrete-hungry jackhammer, coupled with singer/songwriter Joe Grushecky’s street-level, dark-side-of-the-sidewalk lyrics create as potent a sound as has ever been heard in rock music. Here’ they are, though, stuck in Anthem’s ‘Lost & Found Dept’. 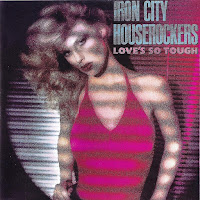 The Iron City Houserockers hit the blacktop running in 1979 with their first album, a tasty lil’ sucker by the name of Love’s So Tough, an excellent introduction to their songs of blue collar life and love, angst and frustration. Grushecky’s voice goes beyond sandpaper in comparative quality, more closely resembling the bubbling molten metal so prominent in the band’s Pittsburgh, Pennsylvania home. This initial recording finds the band missing the mark as often as not, but when their aim is true, the results are amazing: the bittersweet “Stay With Me Tonight,” the lovely “Dance With Me,” and the rockin’ “Heroes Are Hard To Find.”

The Houserockers didn’t miss a beat, giving us their underrated classic second album, Have A Good Time…But Get Out Alive. This is a vinyl cry of defiance, the Houserockers representing both a city and a culture, both sadly oppressed by the economic and urban decay destroying the industrial cities of the Northeast and Midwest. The song titles sum it up and are as tuff & muscular as the tunes themselves: the title cut, “Don’t Let Them Push You Around,” “We’re Not Dead Yet.” This is the same populist common ground that Springsteen and John Cougar have found so much success with the past few year … the Houserockers were doing it five years earlier!

Have A Good Time… features two cuts that are among the most powerful and emotional ever recorded: “Old Man Bar” and “Junior’s Bar.” The young man in “Old Man Bar” hopes that none of his friends see him drinking beer in the old-timer hangout. Backed by only a sparse accordion and mandolin arrangement, the voice sees in the old men and their dashed hopes and dreams his own future. This creates a haunting conflict with his own aspirations, which is reflected in the song and its ending: “It’s true that I am younger now, but it’s very clear, that time is catching up with me I know…”

“Junior’s Bar” has our hero on the prowl, the band suddenly crashing in with guitars ringing as the voice looks for solace and escape, preferably with alcohol and a woman. The contrast between the two songs is pointed, but the continuity of the main character and his attempt to transcend his everyday grind creates a potent seven and a half minutes. 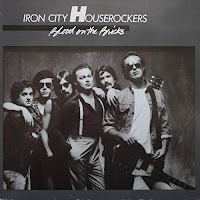 Blood On the Bricks, the third I.C. Houserockers LP, continued their forward motion. Produced by Steve Cropper, the sound is deeper and clearer, but the edge is still sharp. The band handles the familiar working class themes, throwing in a great Viet Nam vet story in “Saints and Sinners” and a tragic romance in “This Time the Night Won’t Save Us.”

In 1983, the band left behind their “Iron City” moniker, searching for a wider audience beyond the geographical limitations of the Northeast. Their first album as the plain ol’ Houserockers, Cracking Under Pressure was an overlooked gem. Currently, the band is playing the bar circuit, another obscure though talented buncha guys found only in the Lost & Found Dept.

Review originally published in the ‘Lost & Found’ column of the Summer 1985 issue of Anthem: The Journal of (un)Popular Culture
Posted by Rev. Keith A. Gordon at Friday, December 23, 2022