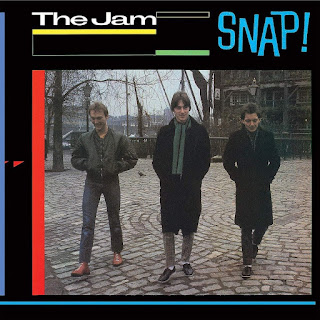 It’s a real disgrace, a downright cryin’ shame that a band as important, as influential, as seminal as the Jam never even came close to making a dent in the American music scene. The primary singles band of the seventies in England, it was at the very tail-end of their career that they saw any sort of recognition on this side of the Atlantic.

Snap! is a two-record compilation of the Jam’s best material over their all too brief lifespan, including many of their U.K. singles. Twenty-nine tunes collected here, all showing the band’s talents and upholding their reputation as the best English band since the Who. Side one begins with “In the City” and takes a quick, enjoyable run through “All Around the World,” “The Modern World,” and “News of the World,” among others.

Side two sees their inspired cover of the Kinks’ “David Watts” as well as their street-level rocker “Down In the Tube Station At Midnight.” “Going Underground,” “Dreams of Children,” and “That’s Entertainment” help fill out side three, while side four holds several jewels, including the Jam’s (only) American hit, “Town Called Malice”; their last studio release, “Beat Surrender”; and their fantastic Motown-inspired classic “The Bitterest Pill (I Ever Had To Swallow),” easily the best single of 1982.

The final judgement – Snap! is a great compilation, a necessity for any fledgling record collection, and a welcome addition to the hardcore fan’s collection, also. (Polydor Records, 1983)

Buy the CD from Amazon: The Jam’s Snap!