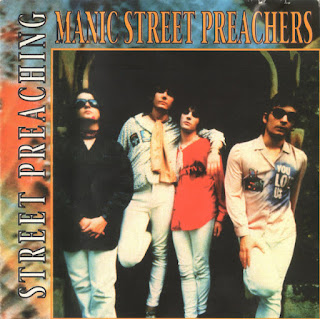 It’s been five years now since my trip to London, but I remember it like it was yesterday. The buzz on the street was for a band that many were calling a cross between the Sex Pistols and the Clash. The British music media was raising a clamor, as well, waxing ecstatic over the band. Intrigued, I spend most of that week trying to hunt down a handful of singles released at that time by the Manic Street Preachers.

Half a decade later, the Manic Street Preachers are one of rock music’s great “might have beens.” Hugely successful in the U.K. and throughout Europe and Japan, their blend of hardcore punk and British pop – or “popcore,” as it’s been terms – never quite caught on in the United States beyond a small audience. Just as their American label was about to release their third album, The Holy Bible, guitarist Richey James disappeared. Vanished, gone, dropped off the face of the planet altogether. That was a year or so ago and, to the best of my knowledge, he’s yet to be found.

‘Tis a shame, actually, given that there seems to be a minor Brit-pop fever spreading stateside what with bands like Oasis, Pulp, and Blur catching fire. Had their third album not been shelved, who knows what MSP might have achieved. There exists a handful of live discs from the band’s short-lived career. Street Preaching, on Italy’s Kiss The Stone label, is a fine documentation of MSP in a performance atmosphere. Culled from 1992 tours of Europe and Japan, Street Preaching includes many of the band’s early English hits like “You Love Us,” “Crucifix Kiss,” “Stay Beautiful,” and “Slash and Burn.” A few songs are included twice (“You Love Us” three times!), represented in slightly varying forms.

The performances captured on Street Preaching may or may not be typical MSP. This 70-minute disc does a fine job of showcasing the band’s electric appeal, however. Vocalist James Dean Bradfield’s charismatic delivery mesmerizes the audience while James’ guitar burns and blisters through every song. Bradfield’s onstage patter is kept to a minimum, so what is presented illustrates a swaggering, confident rock ‘n’ roll frontman. The Manic Street Preachers could have been a big band in the U.S. Luckily, we have Street Preaching, a musical snapshot freezing the band forever in time. Grade: A