We’re saddened to report on the death of the great Matt “Guitar” Murphy, an underrated talent best known for his appearances in the two Blues Brothers movies. Murphy was 88 years old; no cause of death has been announced.

Born in Mississippi in 1929 but raised in Memphis, Murphy learned to play guitar as a child. Moving to Chicago in 1948, Murphy joined the great Howlin’ Wolf’s band, which also featured harp player ‘Little’ Junior Parker. Murphy subsequently played on recording sessions with Parker and Bobby “Blue” Bland before hooking up with legendary blues pianist Memphis Slim. Murphy played guitar behind the pianist throughout the 1950s, including on his classic 1959 album At the Gate of Horn.

During the 1950s and ‘60s Murphy played a lot of recording sessions and was in-demand for live performances as well, working with artists like Chuck Berry, Ike Turner, Muddy Waters, James Cotton, Etta James, Sonny Boy Williamson, and Koko Taylor. He performed on the 1963 American Folk Blues Festival of Europe, and would spend much of the ‘70s performing and recording with blues harp genius James Cotton, appearing on albums like 100% Cotton and High Energy.

For all of his great work on stage and in the studio over three decades, however, it is with the Blues Brothers Band that Murphy may forever be remembered. Formed in 1978 by Saturday Night Live featured players John Belushi and Dan Aykroyd, the Blues Brothers started out as a musical skit featuring music the two comedians loved and quickly struck a chord with audiences, growing into a bona fide pop culture phenomenon. After appearing as the musical guest on SNL, the Blues Brothers recorded the live album Briefcase Full of Blues with some of the best players in the blues and R&B genres, including Murphy, Steve Cropper and Donald “Duck” Dunn (Stax Records) and a complete horn section. The album topped the charts and sold better than three million copies. 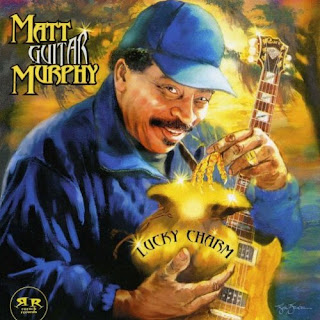 Murphy appeared in the 1980 film The Blues Brothers as part of the band, notably playing guest star Aretha Franklin’s husband, and also appeared in the 1998 sequel, Blues Brothers 2000; his scorching fretwork was featured on the soundtracks to both films. Following up on the popularity of the first film and its accompanying soundtrack, Murphy formed his own band in 1982 and toured both with the Blues Brothers and his own outfit until sidelined by a stroke in 2002. He would return to the stage a few years later, playing a reunion show with James Cotton at the 2010 Chicago Blues Festival and as part of Eric Clapton’s Crossroads Guitar Festival in 2013.

Over the course of his lengthy career, Matt Murphy lent his talents to dozens of albums by some of the greatest legends in the blues and R&B, who sought his contributions to their music. He only recorded four acclaimed albums as a solo artist, however, including 1990’s Way Down South (with his brother Floyd on rhythm guitar) and 2000’s Lucky Charm. The contributions of Matt “Guitar” Murphy to the popularization of blues music and the impact of his enormous talent on the records that define the genre simply cannot be overstated. He will be missed…