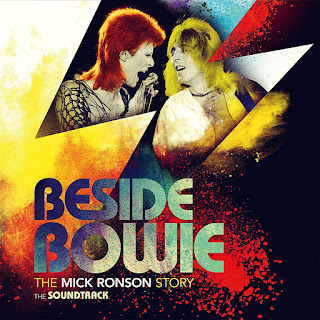 Even during an era of guitar heroes, Mick Ronson was exceptional, albeit underrated. Born in Kingston upon Hull, England Ronson was classically-trained as a pianist as a child, but was inspired to pick up a guitar after becoming enamored with early rocker Duane Eddy’s distinctive “twangy” sound. A veteran of various 1960s and ‘70s-era British rock bands (most notably The Rats), Ronson’s star began its ascent when he became an essential part of David Bowie’s short-lived Ziggy-era “Spiders From Mars” band. Ronson lent his six-string talents to such groundbreaking Bowie albums as 1971’s Hunky Dory, 1972’s classic The Rise and Fall of Ziggy Stardust and the Spiders From Mars, and 1973’s Aladdin Sane and Pin Ups.

When Bowie broke up the “Spiders,” Ronson launched his solo career with a pair of critically acclaimed albums in 1974’s Slaughter On 10th Avenue and 1975’s Play Don’t Worry. Neither disc sold particularly well and a third solo album, recorded in 1976, was subsequently shelved and Ronson dropped from the label. The guitarist soldiered on, however, recording and performing with his longtime friend Ian Hunter (Mott the Hoople) and serving as a “gun for hire” for stars like Bob Dylan, Lou Reed, and John Mellencamp. Ronson would also become an in-demand producer as well, working with artists as diverse as Midge Ure, Morrisey, the Rich Kids, and Slaughter and the Dogs, among others, before his tragic death in 1993 at the too-young age of 46 years. All of this history is recounted in the 2017 documentary film, Beside Bowie: The Mick Ronson Story, for which this CD and vinyl release serves as a soundtrack of the guitarist’s life.

Beside Bowie: The Mick Ronson Story


Beside Bowie: The Mick Ronson Story is essentially bookended by Ronson’s performance as part of the all-star crew appearing at The Freddie Mercury Tribute Concert for AIDS Awareness. Held in April 1992 – a mere year before Ronson’s death from liver cancer – the concert included members of Mercury’s band Queen as well as Bowie, Ronson, Hunter, and Def Leppard’s Joe Elliott and Phil Collen, among many others. Two songs are culled from that show, the first being a raucous performance of the classic “All the Young Dudes,” the Bowie-penned song that revived Mott the Hoople’s career in 1972. With all the hoopla surrounding the live performance of the revered Hoople song, it’s hard to pick out Ronson’s contribution from the fray, which isn’t necessarily the case with the epic live reading of Bowie’s “Heroes” that appears later on the album. Although Ronson was long gone from Bowie’s band by the time that the rock ‘n’ roll legend recorded “Heroes” (with guitarist Robert Fripp of King Crimson), his familiar wiry fretwork drives the performance’s inherent grandeur. 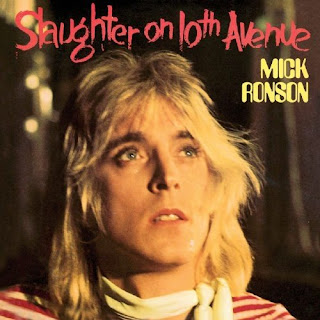 Joe Elliott’s previously-unreleased “This Is For You” was written in tribute to the universally-beloved guitarist, but its rather sedate performance is a real snooze. Ditto for pianist Mike Garson’s tepid instrumental “Tribute to Mick Ronson” which, however heartfelt, is nevertheless a somnambulant ending to an otherwise dynamic collection. The heart and soul of Beside Bowie can be found in four tracks taken from Ronson’s three extant solo albums along with three Bowie tracks that prominently feature the young man from Hull. Although the point of the documentary film is that Mick Ronson was so much more than his work with Bowie, there’s no denying the power of the performances created by the two men. Naturally, Bowie’s “Moonage Daydream” has to be included in any story written about Ronson, his electrifying fretwork melding with Bowie’s otherworldly vocals to create a rare bit of musical magick.

“Cracked Actor,” a favorite from Bowie’s 1973 album Aladdin Sane, is another bit of rock ‘n’ roll finery, a guitar-driven melody welded to a foot-tapping rhythm while the lesser-known Bowie track “Time,” also from Aladdin Sane, displays Ronson’s subtle side. Curiously, all four of Ronson’s solo tracks here were taken from posthumous albums released in 1994 (Heaven and Hull) and 1999 (Just Like This) – nothing from his earlier solo efforts. Recorded in 1976 as Ronson’s third solo album, but not released until ’99, Just Like This offers the excellent “Hard Life,” a muscular, melodic rocker with stellar guitar playing including a Ziggy-ish solo that soars above the mix. A cover of Dylan’s “Like A Rolling Stone,” from the acclaimed Heaven and Hull album, showcases Ronson’s six-string abilities in his familiar role as sideman, expertly backing up Bowie’s vox on the classic song. A pallid cover Giogio Moroder’s languid instrumental “Midnight Love,” where Ronson plays all the parts, would have best been replaced by anything from Ronson’s earlier solo albums.


Not having seen Beside Bowie: The Mick Ronson Story documentary film (yet), I can’t speak with certainty how representative this “soundtrack” album may be to the music actually included in the film, but I see how this CD could easily have been expanded into a two-disc set. Any of Ronson’s contributions to recordings by Lou Reed, John Mellencamp, Bob Dylan, or Roger McGuinn could have been included here, and we could have used more Bowie (with whom he recorded five studio albums) and Hunter (appearing on four studio albums).

That minor cavil aside, while the hardcore Ronson fan already has almost all of these songs, it’s nice to get them on one disc (or two vinyl LPs), and for newcomers to the music and magic that was Mick Ronson, Beside Bowie offers a rock solid introduction to the guitarist’s talent and charm, opening the door for the musically curious to Ronson’s underappreciated solo albums as well as his timeless work with Bowie and Hunter. Grade: A- (Universal Music, released June 8, 2018)

Buy the vinyl LP from Amazon.com: Beside Bowie The Mick Ronson Story