Archive Review: Roky Erickson's I Have Always Been Here Before (2005) 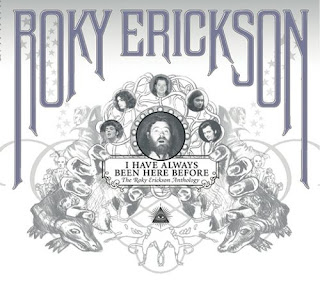 Any rock snob or music historian worth his or her credentials knows the story of Roky Erickson by heart. Naïve young musician flirts with the big time, gets hassled by intolerant local law enforcement, chooses a mental hospital over serious jail time after getting jammed up on a marijuana possession charge (due to the draconian anti-drug laws in Texas) and pays for this choice for the rest of his life.

Unlike other madmen and visionaries of rock 'n' roll, however, Erickson's mental instability is less organic than manufactured, any neurotic tendencies he may have possessed before he entered the asylum blown up by the dubious treatments of electro-shock and psychoactive drugs. After his release from the institution in 1973, shady operators, fly-by-night labels, rip-off artists and bad luck plagued Erickson's subsequent musical career – which, incidentally, has nevertheless lasted longer than most of his contemporaries from the '60s.

Roky Erickson's I Have Always Been Here Before


Lost among the whispers, rumors and half-truths of Erickson's legend is the fact that the artist has made some pretty damn good music over the past forty years. Sure, for a long time any charlatan with a microphone and an eight-track tape deck would closet Roky in a studio, on a stage, or even in a hotel room to record his songs (recordings for which the artist never earned a dime). Prolific to a fault, Erickson would crank out the songs, enigmatic rockers and sad-eyed folk tunes that spoke of two-headed dogs, demons and outer space, the chatter in his mind taking form as interesting and often mesmerizing lyrical poetry.

Unfortunately, for the uninitiated wanting to delve into the Erickson catalog, the choices have been confusing and often times disappointing, albums marred by poor sound quality, duplicate performances and dubious stewardship. Music lovers who want a taste of Erickson's talent can rejoice in the Shout Factory's excellent two-disc set I Have Always Been Here Before.


Featuring forty-three songs culled from four decades of the artist's lengthy career, this is the only Roky Erickson anthology the average music lover will ever need. Assembled with loving care by long-time Erickson supporter Bill Bentley (who also produced the wonderful 1990 Roky tribute album Where The Pyramid Meets The Eye), I Have Always Been Here Before displays the many faces of this amazing artist in roughly chronological order.

The first disc kicks off with the rare Spades B-side "We Sell Soul" featuring Roky's piercing tenor vocals, jumping quickly into the psych-garage classic "You're Gonna Miss Me." The disc features a total of ten 13th Floor Elevators songs, culled from the band's first two albums, 1966's The Psychedelic Sounds Of and 1967's Easter Everywhere. After his release from the mental hospital in 1973, Erickson's friends helped him form his first backing band, Bleib Alien. This band recorded a handful of tracks in an Austin, Texas studio with Doug Sahm, including "Red Temple Prayer (Two-Headed Dog)" and "Starry Eyes," both of which would be revisited by Erickson frequently through the years to follow. Part of the Erickson mythology is that he sold the rights to a handful of songs, including the hauntingly beautiful "Starry Eyes," to Sahm for a slushie.


From 1975 until the late '90s, trying to nail down Erickson's extensive catalog is like tiptoeing through a minefield while on crutches. One of the most productive eras of Erickson's career was with his late '70s band the Aliens, which recorded fifteen strong tracks in Austin with Creedence Clearwater Revival bassist Stu Cook (who was playing with Sahm at the time). These tracks -- psych-rockers and proto-metal romps with vivid lyrical imagery like "Creature With The Atom Brain" and "It's A Cold Night For Alligators" -- would travel the globe. The fifteen songs would be packaged and repackaged a maddening number of times by various labels, although they were originally released by CBS on two albums in 1980/81. Around two-thirds of the Stu Cook recordings are presented on I Have Always Been Here Before.

The second disc concludes the Cook session material, includes an assortment of Erickson's imaginative work with Evil Hook Wildlife E.T., songs from the All That May Do My Rhyme album recorded with Paul Leary of the Butthole Surfers in the mid '90s and various solo acoustic recordings. Erickson's impressive songwriting skills are reflected in touching ballads like "You Don't Love Me Yet," "For You I'd Do Anything" and "Clear Night For Love" that display Erickson's tortured vocals and lonely, lovelorn lyricism. The second disc also includes a fair number of rockers, often-covered tunes like the rockabilly-tinged "Don't Slander Me" and "The Beast," a bluesy work-out with fractured vocals and taut lead guitar work.


With a documentary film on the horizon, this exhaustive two-disc anthology and the recent reissuing of Restless/Pink Dust label collections like Don't Slander Me and Gremlins Have Pictures, a full-fledged Roky Erickson revival seems right around the corner. It's about time, too, to take a look behind the veil of mystery to discover the too-often overlooked talents of one of rock & roll's truly misunderstood artists. I Have Always Been Here Before is an essential collection for anybody interested in discovering the heart and soul of rock 'n' roll as embodied by Roky Erickson. (Shout! Factory, released March 1, 2005)

Buy the CD from Amazon.com: Roky Erickson's I Have Always Been Here Before

(Royalties from I Have Always Been Here Before benefit the Roky Erickson Trust Fund, formed by Roky's brother and others to help provide the artist with food, shelter and medical care.)

Review originally published by Alt.Culture.Guide™ music zine, 2005
Posted by Rev. Keith A. Gordon at Thursday, May 10, 2018