The Return of the Chocolate Watchband

From a fascist-leaning Presidential administration to the horrible racism experienced by people of color in America, it seems that everything old is becoming new again. This goes double for rock music, which seems unable to nurture dynamic, creative young talents these days and instead finds itself increasing looking backwards to the 1960s for succor and inspiration. It’s fitting, perhaps, that we should relive the tumultuous psychedelic decade as we certainly seem to have forgotten the hard-fought lessons of Nixon, Viet Nam, and the civil rights and anti-war movements.

Into the void strut erstwhile ‘60s-era psychedelic pioneers the Chocolate Watchband. One of the legendary garage-rock bands of the era, the Chocolate Watchband formed in San Jose, California in 1965, appeared in the ground-breaking 1967 movie Riot On Sunset Strip, and would release three critically-acclaimed albums between 1967 and ’69, including No Way Out and The Inner Mystique. The band broke-up in 1970 but reformed in 1999 under the aegis of original vocalist David Aguilar and drummer Gary Andrijasivich. They’re still kicking around today with a line-up that includes guitarist Tim Abbott (who played with the band in 1967) as well as guitarist Derek See and bassist Alec Palao, both veterans of the Rain Parade, performing festivals with like-minded artists like the Strawberry Alarm Clock, the Electric Prunes, and the Yardbirds. 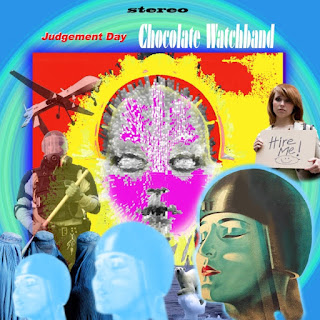 Like I said, everything old is new again, and the Chocolate Watchband has released a pair of new singles and a very cool video of a live performance of the Kinks’ “I’m Not Like Everybody Else.” The two new songs – “Judgment Day” and “Secret Rendezvous” – were recorded last year at Kingdom Voice Productions in Santa Clara, California. Framed by exotic, Middle Eastern-sounding riffs and Aguilar’s howling harpwork, “Judgment Day” is a bluesy, psych-drenched rocker with socially-conscious topical lyrics and some scorching fretwork while “Secret Rendezvous” is a ramshackle garage-rocker with dense, chaotic instrumentation and largely-buried vocals that evokes memories of the band’s halcyon days.

In a press release announcing the new songs, band vocalist David Aguilar says, “I wrote ‘Judgment Day’ as the country was still in recovery after every dollar you might have had invested suddenly tanked thanks to Wall Street. People were getting laid off, they were moving backwards in income, homes were being foreclosed on. Families were living in their cars. It was a terrible time for the American dream. But this was pure opportunity for those who enjoyed stratospheric wealth. Wall Street gangsters, bailed out by American taxpayers, were rewarded for their massive greed and stupidity. They immediately started buying up everything they could, hotels, new corporate jets, restaurants chains, radio stations, small businesses, big businesses, casinos, 300+ acre ranches with 16,000 square foot homes in compounds near Aspen, on Long Island, or in Florida. Their trophy wives were pampered like pet poodles. It resulted in the anger that put the current president into the White House. And it’s ironic, Judgment Day didn't come for the political party that remains the mouthpiece for the fat cats. And now the White House is filled with more Wall Streeters! The Who were wrong, Americans can get fooled again!”

Both songs are available for purchase from iTunes, Amazon, and elsewhere and we’ve embedded the band’s new video (as well as a classic vintage performance) below for your enjoyment. Now’s the right time to rediscover the Chocolate Watchband!

Also on That Devil Music.com: The Chocolate Watchband’s The Inner Mystique CD review