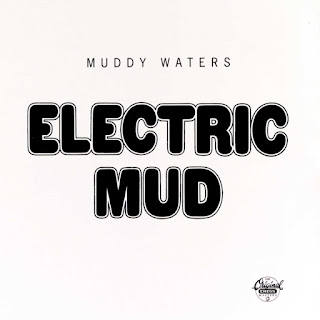 The mid-to-late 1960s were a difficult time for the bluesmen of the 1950s. The young African-American audiences they once ruled had largely turned their back on the blues, preferring the pop-soul of Motown or the Memphis soul of Stax Records to what they increasingly saw as their “parent’s music.” Young white rock ‘n’ roll fans had just begun to embrace the blues, leaving legends like Muddy Waters, Howlin’ Wolf, and Little Water, among others, to scramble for every hard dollar. For Waters, this meant his record label – Chess Records – trying to bring a contemporary edge to his music by forcing the bluesman into the uncomfortable position of a blues-rock artist.

Many, if not most, blues purists shudder and shake their collective heads in revulsion at the very mention of Waters’ Electric Mud album, the result of a grand experiment by producer Marshall Chess to introduce the bluesman to a young, white audience. For some of us, though, the 1968 recording was our first exposure to the Chicago blues legend, and while many of the album’s performances don’t meet the highs of either Waters’ classic 1950s sides or his late-career, Johnny Winter-produced 1970s era albums, Electric Mud still has its charms. The album sold exceptionally well upon its release and has proven to be quite influential in the years since, with artists as diverse as guitar-god Jimi Hendrix and rapper Chuck D singing the praises of Electric Mud.


Chess had a simple concept for Electric Mud: re-imagine Muddy’s classic songs as psychedelic blues-rock romps (it was 1968, after all) and back the master with a band of young players like guitarists Pete Cosey and Phil Upchurch, and keyboardist Charles Stepney, the latter two men from the great psychedelic-soul outfit Rotary Connection. While many of the song choices for Electric Mud were pretty good, others – like a horrible cover of the Rolling Stones’ “Let’s Spend the Night Together” – makes one wonder what Chess was thinking in making what he termed a “concept album.” Still, as mentioned previously, there’s a lot to like on Electric Mud.

Waters’ classic “She’s All Right” is re-tooled as a dark-hued voodoo stomp, Waters’ hypnotic vocals reaching up from the boggy swamp, his voice surrounded by squalls of swirling wah-wah guitar and crashing drumbeats, the song’s extended jam evolving into a soft-peddled instrumental fade-out of the Temptations’ “My Girl” complete with dancing flute. The raucous Waters/Bo Diddley gem “I’m A Man (Mannish Boy)” benefits greatly from a more rock-oriented arrangement, wiry guitars entwined with Waters’ swaggering vocals and explosive rhythms to great effect.

The Willie Dixon-penned “I’m Your Hoochie Coochie Man” welds jazzy guitar licks to blustery rock ‘n’ roll percussion and bluesy vocals for a powerful performance. Although Waters’ vocals are all but lost in the din, the unbridled psychedelic zeal of “Herbert Harper’s Free Press” made the song one of Hendrix’s favorites, while Dixon’s “Same Thing” displays Waters’ ability to rise above the mix to deliver a strong vocal performance amidst smothering instrumental chaos, with (I’m guessing) Upchurch’s jagged, fractured guitarplay embroidered throughout the performance.


While critics, almost to a man, hated Electric Mud, the album equally reviled by the aforementioned blues purists, young white rock fans – especially those in England, the land of Eric Clapton and Jimmy Page – flocked to the LP in droves. It was, for a while, Waters’ most commercially-successful album, so when it came time to start thinking about a follow-up, Chess decided to deliver fans more of the same, but with a few significant changes. For 1969’s After the Rain, producer Chess got rid of the awkward, ill-fated cover tunes and instead went with tried-and-true blues treasures from Waters’ deep catalog of songs.

Nevertheless, Electric Mud remains a valuable document of Waters’ lengthy and unusually varied (for a bluesman of his vintage) career, the psychedelic-blues sounds of Electric Mud definitely a product of their era. The guitars of free-jazz master Pete Cosey (who would go on to play with Miles Davis) and psychedelic-soul innovator Phil Upchurch (vastly underrated, in my estimation) positively light up Electric Mud, an album that continues to find a new audience on CD and vinyl in spite of itself...

Buy the CD from Amazon.com: Muddy Waters’ Electric Mud & After the Rain twofer

Buy the vinyl from Third Man Records: Muddy Waters’ Electric Mud
Posted by Rev. Keith A. Gordon at Tuesday, May 01, 2018