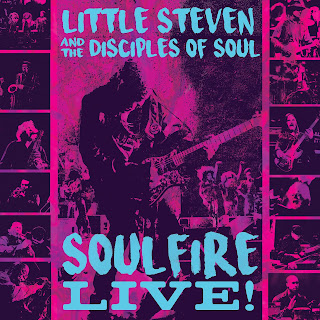 It was a pleasant surprise to discover that Little Steven Van Zandt was releasing a live album, the twenty-four track Soulfire Live! Recorded with his the Disciples of Soul band during last year’s North American and European tours in support of Soulfire, Van Zandt’s first studio album in nearly 18 years, the collection is already available from digital musical retailers and streaming services. A three-disc CD set, Blu-ray disc, and vinyl editions will be released sometime this summer.

Produced by Van Zandt, Soulfire Live! is a career-spanning collection that benefits from Little Steven’s song introductions and onstage patter, the album featuring material like “I Don’t Want To Go Home” and “Saint Valentine’s Day” from Soulfire as well as deep cuts like “Bitter Fruit,” “Solidarity,” and “Princess of Little Italy” from Van Zandt’s early ‘80s albums. The live disc also includes high-octane covers of classic songs like Electric Flag’s “Groovin’ Is Easy,” Etta James’ “Blues Is My Business,” and James Brown’s “Down and Out In New York City.”

As stated above, Little Steven and the Disciples of Soul have launched a tour of the U.S. and Europe that benefits TeachRock, the Rock and Roll Forever Foundation’s national initiative to bring music curriculum to middle and high schools across the country. TeachRock will host workshops at each tour date to educate teachers on how to implement music education in their schools. Van Zandt will be taking a side trip from the tour when he hosts The Blues Foundation’s Blues Music Awards show in Memphis, Tennessee on May 10th, 2018; Little Steven & the Disciples of Soul will also perform a show on May 8th in Memphis to kick off the Blues Music Week festivities.

Buy the digital album from Amazon.com: Little Steven & the Disciples of Soul’s Soulfire Live!
Posted by Rev. Keith A. Gordon at Sunday, May 06, 2018