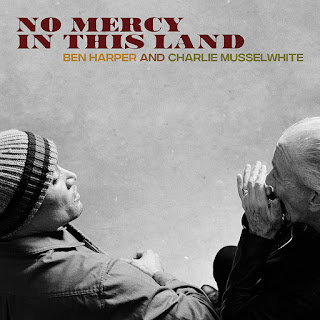 Ben Harper is a musical chameleon who has dabbled – and quite successfully I might add – in blues, rock, soul, and even reggae music. A three-time Grammy® Award winner, Harper has better than a dozen studio and live albums under his belt, but few have showcased his skills as both a songwriter and guitarist than his award-winning 2013 collaboration with bluesman Charlie Musselwhite, Get Up! The critically-acclaimed album successfully introduced Harper to the blues audience and did the same for blues lifer Musselwhite, introducing his raging style of harmonica blues to the alt-rock crowd that has long adored Harper.

Harper and Musselwhite first met in 1997 while both were playing a session for blues great John Lee Hooker, who first had the idea that the two artists could make beautiful music together. Their paths crossed many times through the years as Harper was building a career and Musselwhite was cementing his legacy as one of the blues’ great harp players alongside legends like Little Walter, Sonny Boy Williamson, and Big Walter Horton. While Get Up! displayed a certain musical chemistry, it was touring together in support of the album that tightened the bond between the two artists, a musical brotherhood quite evident in the grooves of the pair’s sophomore effort, No Mercy In This Land.

Ben Harper & Charlie Musselwhite’s No Mercy In This Land


Harper wrote or co-wrote all the songs for No Mercy In This Land, his lyrical voice haunted by the ghosts of the Mississippi Delta, blues-infused material like “When I Go” and inspired by giants like Charley Patton and Son House. Even bluesier, perhaps, than its predecessor, the album reveals diamonds like the country-blues jaunt “Bad Habits,” which features a spry rhythmic soundtrack above which Musselwhite’s harmonica soars. “Love and Trust” evinces some hard-fought wisdom and brilliant imagery highlighted by the song’s inspired acoustic strum while “The Bottle Wins Again” is a blustery, rockin’ slab o’ Chicago blues run amok with raging harp, a stompin’ rhythm, and Harper’s best guttural Howlin’ Wolf styled vox.

There’s not much romance to be found among the songs on No Mercy In This Land, but “When Love Is Not Enough” is a good old-fashioned heartbreak song, minimalist in its instrumentation but offering up Harper’s most soulful vocal performance on the album, the singer channeling Otis Redding and Levi Stubbs in his delivery, his vocals supported by his sublime fretwork. “Trust You To Dig My Grave” is virtually a Piedmont blues tune, Harper’s nimble guitarplay evoking Blind Blake while Musslewhite’s harp provides valuable accents; together they remind of Sonny Terry and Brownie McGhee. The album’s title track is stunning, subtle, and powerful, Harper’s apocalyptic guitar slung low beneath the lyrics, his sweeter vocals complimented by Musselwhite’s weathered voice and mournful harp playing. “Nothing At All” is equally strong, Harper’s considered vocal delivery enhancing the emotional heft of the lyrics.


From open to close, No Mercy In This Land is an incredible collaboration between two musical titans. Ben Harper brings intelligent, poetic lyrics and a sense of youthful vigor to the performances, an energy that spurs Charlie Musselwhite – a jaded veteran who has played with bona fide legends like Big Joe Williams, John Lee Hooker, and Michael Bloomfield – to play here like a man possessed. The result is an instantly classic album that fuses blues and soul music like few artists have been able to do. My only complaint is that the album’s 35-minute running time is too little when the music is as good as what you’ll find on No Mercy In This Land. Grade: A+ (Anti- Records, released March 30, 2018)

Buy the CD from Amazon.com: Ben Harper & Charlie Musselwhite’s No Mercy In This Land
Posted by Rev. Keith A. Gordon at Sunday, May 06, 2018