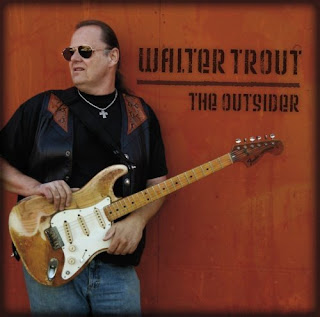 Madman guitarist Walter Trout has credentials that put most of his peers to shame, earning his guitar star status after spending the latter part of the 1970s as a “gun for hire” with the touring bands of John Lee Hooker and Big Mama Thornton. Trout further honed his skills on the road as a member of blues-rock band Canned Heat, and performed with the legendary John Mayall’s Bluesbreakers alongside guitarist Coco Montoya for a few years. Trout launched his solo career in 1989, and has since racked up accolades and acclaim for both his electrifying live performances and over a dozen live and studio albums.

Following up on 2006’s Full Circle album, where Trout collaborated with friends and fellow travelers like Mayall, Montoya, Guitar Shorty and Joe Bonamassa, The Outsider is Trout’s second new studio effort since 2001, a strong electric-blues collection that literally raises the roof. If many blues-rock guitarists sound like they’re skipping stones across a pond, Trout and his pick-up band of rock veterans hit your ears like a wrecking ball demolishing a building.


The Outsider opens with the white-hot bulldozer “Welcome To the Human Race,” a strong first pitch that roars across the plate with an abundance of screaming fretwork, muscular bass lines, and ‘70s-style big-beat drum bashing. Trout’s voice barely scrapes above the swirling maelstrom of 100% pure blues noise, singing about the highs and lows, temptations and obstacles of humanity, the lyrics striking these ears as more than a little biographical in nature. It’s a mighty powerful opening statement, one that helps set the stage for much of what follows on The Outsider.

You’d expect a bit of a letdown after a burner like “Welcome To the Human Race,” but Trout doesn’t stumble as much as he slows down the pace from a maddening race to a deliberate gallop with “The Next Big Thing.” Ostensibly an Old West parable, the song doubles as a metaphor for the blues game…just replace “gunslinger” with “guitarist” and you’re in the same lyrical ballpark as, say, Bad Company’s “Shooting Star.” Trout’s guitar wiggles and moans and cries throughout the song, finally jumping up and flying away with an exotic squiggly pseudo-psychedelic guitar fade-out.


Pitched to a bluesy Texas shuffle, “The Love Song of J. Alfred Bluesrock” is a fairly cheeky little bit o’ fun, Trout taking aim at the poseurs and wanna-bes that equate self-destruction with suffering when singing that they have the blues. It’s a subject that, perhaps, Trout knows a little bit about, but his accusations here are tactful rather than venomous, supported by a raging Stevie Ray-styled guitar-mangling and explosive, machinegun drumbeats.

“Child of Another Day” is a sophisticated story-song about another lost soul on the blues highway, an insightful tale complimented by a powerful Trout vocal turn, some fine lyrical imagery, and guest star Jason Ricci’s rockin’ harpwork. Between Trout’s axe and Ricci’s harp, the two instrumental bruisers move the song into the heavyweight category so that the rhythm section can deliver the knockout punch. The acoustic intro to “Turn Your Eyes To Heaven” will catch you off guard, until you figure out that this is Trout all by his lonesome, the singer delivering an uncharacteristically subtle performance on a smart song about hypocrisy and judgement.


The 1970s-era hard rock vibe of “The Restless Age” is created by Trout’s spoken-sung vocals, swinging guitarwork, and the addition of pianist Jon Cleary’s boogie-woogie barrelhouse key-pounding. The world-weary lyrics of “Gone Too Long” are given a bit of Latin flavor by Sammy Avila’s keyboard punctuations and Trout’s sassy, Santana-styled riffing. “Can’t Have It All” is another swaggering blues-rock romp, taking its cue from the John Lee Hooker songbook, its martial rhythms marked by descending guitar notes and foot-stomping six-string riffs.

The surprising “Sanjay” is Trout’s yin to the yang of Bob Dylan’s “Hurricane.” Written in support of “Bollywood” film star Sanjay Dutt – sentenced to prison on questionable charges in his homeland of India – the song is a stomp-and-stammer rocker with a bit of New Delhi flavor and some blistering string-bending. The album closes with the title track, an introspective and thoughtful meditation on what it’s like to be on “the outside looking in,” Trout’s gruff vocals complimented by a strutting, soaring electric-blues soundtrack. Trout’s fingers dance in the fire, Rick Knapp’s bass paces like a caged tiger, and Kenny Aronoff’s drums cruise with the sonic subtlety of a jet fighter.


With a new studio band consisting primarily of roots rock journeymen James “Hutch” Hutchinson (Delbert McClinton, Ryan Adams) – who plays bass on ten of the album’s thirteen songs – and drummer Kenny Aronoff (John Mellencamp, Bob Seger), Trout has formed a trio that is flexible enough to hold up the bottom end of his throwback electric-blues/classic rock sound. More than this, The Outsider features some of Trout’s strongest songwriting in a decade, and flaming six-string work that is out-of-this-world. A collection that puts the “rock” into blues-rock, The Outsider showcases Walter Trout at his very best. (Provogue Records, released June 24, 2008)

Buy the CD from Amazon.com: Walter Trout’s The Outsider
Posted by Rev. Keith A. Gordon at Wednesday, July 04, 2018