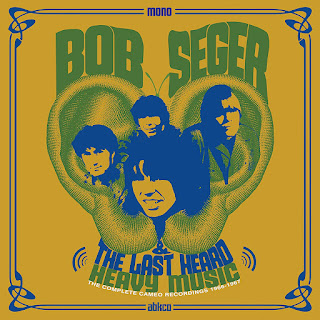 Rock legend Bob Seger has long been disinclined to revisit his past, and has steadfastly refused to reissue classic 1970s-era albums like Mongrel, Seven, and Back In ’72 on CD (and those original vinyl copies are fetching a pretty penny these days!). Sure, there have been dribbles and drabbles through the years – Seger’s incredible “covers” album Smokin’ O.P.’s was reissued a decade or so ago, and the Bob Seger System’s 1968 album Ramblin’ Gamblin’ Man got a nifty CD reissue a couple years back, but Seger’s long-suffering fans have had to settle for “import” copies of dodgy provenance (and dicey sound) of those earlier albums to fill out their collections.

Don’t know why ‘Rockin’ Robert’ has had such an aversion to reissuing albums like Seven and Back In ’72 (two fan favorites), as just these two discs include classic songs like “Rosalie,” “Turn the Page,” “Get Out of Denver,” and “U.M.C. (Upper Middle Class)” that were part of his live setlist for decades. As for Bob’s mid-1960s singles like “East Side Story,” “Persecution Smith,” and “Heavy Music,” released as Bob Seger & the Last Heard, forgetaboutit! These Cameo-Parkway Records releases go for double-digits on the collectors’ market (when you can find a decent copy).

Well, Bob Seger fans, rejoice, for another “drabble” of classic Bob will be “dribbling” out on September 7th, 2018 when ABKCO Records releases Heavy Music: The Complete Cameo Recordings 1966-1967, a ten-track compilation that collects all of Seger’s early singles with the Last Heard for the first time on a single CD or vinyl album (it will also be available as a digital download). The album has been provided new cover art and includes rare photos from the Cameo-Parkway Records archives as well as liner notes by writer Jim Allen. Befitting the era, the collected singles are offered in their glorious original monophonic sound, mastered by Robert Vosgien at Capitol Mastering and the vinyl version was appropriately pressed in Detroit by Third Man Records.

There’s a lot of great music to be heard on Heavy Music, including the original version of the title track (another longtime live staple), the socially-conscious “East Side Story” (which receives frequent airplay on Little Steven’s Underground Garage channel on Sirius XM satellite radio), and “Persecution Smith,” all of which were regional hits for those of us lucky enough to be living in the “Rust Belt” of America in the shadow of the Motor City. You’ll find a complete tracklist below, as well as a link to order the vinyl version of the album (that’s the one I’m personally going for!). Now if we could just get Bob to change his mind about Back In ’72...