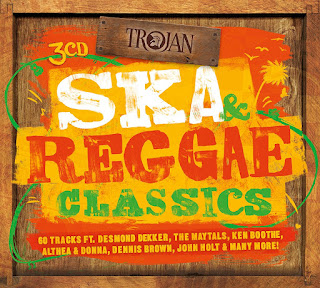 For even some of the most knowledgeable fans, reggae music remains an enigma. While most will know of Bob Marley and the Wailers, fewer still will be familiar with Jimmy Cliff, Toots Hibbert, or Peter Tosh. More obscure entries in the reggae canon – talents like Dennis Brown, Bunny Wailer, or the Upsetters – are strictly niche artists in the U.S., known and appreciated by a select few fans. But for 50 years now, the legendary Trojan Records label has been popularizing the influential genre by continuously hitting “replay” on its deep and rich catalog of early reggae recordings. Formed in 1968 by British record store owner Lee Gopthal with Chris Blackwell of Island Records, who was a bigtime reggae fan, Trojan Records successfully introduced the genre to a worldwide audience, scoring a number of U.K. chart hits throughout the ‘70s with a steady stream of 7” singles often licensed from well-known Jamaican producers like Duke Reid, Leslie Kong, Joe Gibbs, and Lee ‘Scratch’ Perry.

Reggae itself was a result of the cross-pollination of the ska and rocksteady music styles popular in Jamaica in the late 1950s and early ‘60s. Ska was the island equivalent to American rhythm & blues, which could be heard on AM radio in Jamaica, broadcast by U.S. clear-channel stations like the 50,000-watt WLAC-AM in Nashville, Tennessee. Featuring a distinctive rhythmic pattern, jazz-influenced horns, and spry vocals, ska would become the predominant pop music style in Jamaica during the ‘60s. Rocksteady would follow, slowing down the rhythm of ska and downplaying the horns in favor of vocals and heavier guitars. Reggae, heavily influenced by the Rastafari movement on the island, would assimilate both native styles along with American rock influences to create an entirely new genre that would lead to a global commercial explosion of artists like Bob Marley, Toots & the Maytals, Black Uhuru, and many others.

Throughout its first two decades, Trojan Records released singles in every island style, resulting in an abundant catalog of hundreds of songs that the label continues to promote to this day. In celebration of the Trojan’s 50th anniversary, they’ve released a handful of historic multi-disc compilation CDs, including Trojan Ska & Reggae Classics and This Is Trojan Roots, as well as the monster six-disc vinyl set This Is Trojan, featuring a tracklist comprised of 60 of the label’s biggest hits. Although ownership of Trojan Records has changed hands several times over the past five decades, eventually landing on BMG Music’s doorstep, the music released by the label during its halcyon days remains timeless.


The first disc of Trojan Ska & Reggae Classics is titled “Ska Explosion,” comprised of mostly Jamaican music OGs plowing the now-familiar rhythmic pattern for hit singles on the island. The disc, appropriately enough, opens with what might well be the label’s historically best-selling single, Desmond Dekker & the Aces’ “Israelites.” The 1969 classic hit #1 in the U.K. and charted Top Ten in the U.S. and a half-dozen other countries on its way to selling better than a million copies worldwide on the strength of its syncopated vocals, socially-conscious lyrics, and melodic rhythm. “Double Barrel,” a 1970 single by Dave and Ansel Collins, was another U.K. chart-topper that also hit Top 20 stateside; the song’s tinkling piano and odd, often-shouted lyrics was an unlikely successor to “Israelites,” but its undeniable melody digs deep into your brain.

There are a number of other familiar tunes representing the “Ska Explosion,” great songs like the Maytals’ “Monkey Man,” the Upsetters’ “Return of Django” (produced by Lee ‘Scratch’ Perry), Dandy’s “Rudy, A Message To You” (a 1979 U.K. hit for the Specials), and the Paragons’ “The Tide Is High” (a 1980 #1 hit for Blondie in the U.S. and U.K.). Harry J Allstars’ rollicking instrumental “Liquidator” was also covered by the Specials, but the original recording features the instrumental talents of several members of the Upsetters and the Wailers. There are a few pleasant surprises on the first disc, too, like the Ethiopians’ lively “Last Train to Skaville,” with its driving rhythm; Tony Tribe’s “Red Red Wine,” a reggae-remake of an early Neil Diamond song and a 1983 hit for British reggae acolytes UB40; and the reedy “Let’s Do Rock Steady” by Dandy, featuring a laid-back groove and a chunky, infectious rhythm. 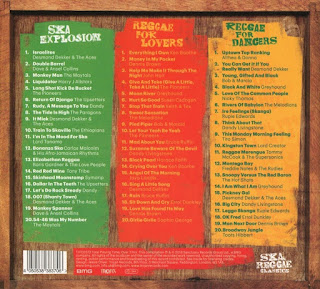 Disc two of Trojan Ska & Reggae Classics is dubbed “Reggae For Lovers” as it features songs with a more romantic lyrical slant. To be honest, this material is less familiar although it features a few of the artists from disc one, and I’ve heard of some of the other singers among the disc’s 20 songs. This lack of familiarity merely provides fertile ground for discovery, and it should be no surprise that there are a lot of great performances here. Ken Boothe is one such discovery, as the singer’s 1970 album Freedom Street was recently reissued on vinyl. Boothe’s “Everything I Own” is a cover of David Gates’ 1972 Top Ten U.S. hit by his wimp-rock band Bread. Boothe injects the song with great soul and passion, raising it above its meager roots to create a truly impressive romantic plea. The prolific and influential Dennis Brown shows why Bob Marley called him “The Crown Prince of Reggae” with the wonderful “Money In My Pocket,” his soulful crooning bouncing perfectly off the jaunty rhythm track.

Desmond Dekker proves that he was no “one trick pony” with the doo-wop inspired “Sing A Little Song,” the subtle instrumentation supporting Dekker’s high-flying vocals and the band’s backing harmonies. Former Paragons’ frontman John Holt nails a cover of Kris Kristofferson’s classic ballad “Help Me Make It Through the Night,” the song’s mid-tempo arrangement allowing Holt’s vocals to shine while spare use of horns spice up the mix. Another Boothe performance, “Crying Over You,” places equal emphasis on the instrumentation as it does his emotional vocals, while Dennis Brown’s “Love Has Found A Way” could easily be mistaken for a 1970s-era soul hit by Teddy Pendergrass or Curtis Mayfield if not for the ever present reggae rhythm. A cover of the 1968 Merrilee Rush hit “Angel of the Morning” by Joya Landis and Tommy McCook with the Supersonics lacks Rush’s hauntingly vulnerable vocals, but Landis nevertheless does a fine job of capturing the song’s inherent romantic yearning.


Disc three, “Reggae For Dancers,” closes out the Trojan Ska & Reggae Classics set by delivering exactly what it promises – foot shuffling, energetic dance tracks with spry rhythms, songs that inspired the U.K. Two-Tone movement in the ‘80s that resulted in bands like the Specials, the (English) Beat, Madness, and the Selector, among many others. “Uptown Top Ranking,” recorded by Jamaican teens Althea Forrest and Donna Reid and produced by Joe Gibbs, was an unlikely 1977 U.K. hit done on a whim by the young singers. Played, evidently by accident, by legendary British DJ John Peel, his radio audience quickly requested more spins of the record. It was ‘frankensteined’ together by Gibbs using a re-recorded rhythm track from a ten-year-old Alton Ellis song and pieces of Trinity’s “Three Piece Suit,” to which “Uptown Top Ranking” was ostensibly an “answer song.” Nevertheless, the song’s hypnotic vocals and droning rhythm veers dangerously close to dub territory. Desmond Dekker’s 1970 hit cover of reggae legend Jimmy Cliff’s “You Can Get It If You Really Want” is a soulful slab of old-school rocksteady influenced by 1950s-era American R&B songs.

The country music gem “Love of the Common People,” with its socially-conscious lyrics, has been covered by dozens of artists, ranging from Waylon Jennings and Wayne Newton to British blue-eyed soul singer Paul Young and Irish punk-rockers Stiff Little Fingers. Working with producer Joe Gibbs, Jamaican reggae artist Nicky Thomas scored a Top Ten U.K. hit with his pop-tinged reading of the song, selling over 175,000 copies of the single. Trinidadian singer Lord Creator’s “Kingston Town” is more of a calypso-flavored R&B song with a strong rhythmic undercurrent while a cover of the 1970 Bobby Bloom hit “Montego Bay” by Freddie Notes & the Rudies is delightfully revved-up and turbocharged with soul. Changing their name to Greyhound, Notes and his band would score a bigger hit with their 1971 cover of the American folk song “Black and White,” which would later become a huge stateside hit for rockers Three Dog Night. The most surprising track on the set is the Hot Shots’ cover of the 1966 pop novelty song “Snoopy Versus the Red Baron,” the song’s lilting melody and jacked-up rhythm tailor-made for Jamaican reinterpretation.


Reggae detractors always say that the genre is “too bland,” that its underlying rhythmic foundation makes every song sound alike. The musical bias of these amateur critics aside, reggae is full of nuance and character, with individual singers like Desmond Dekker, Ken Boothe, Toots Hibbert, and Dennis Brown transcending the mundane to deliver performances the equal of any American or British blues or soul vocalist.

Offering 60 red-hot tracks on three discs and running better than three hours in length, the budget-priced Trojan Ska & Reggae Classics set offers a lot of bang for the buck, the compilation preserving some of the finest reggae performances of the past half-century with even-handed re-mastering and pretty decent sound (considering that some of these songs were recorded almost 50 years ago on often primitive equipment). If you’re a newcomer to reggae, the set offers an instant lesson in the genre’s history; for us longtime fans, it collects some of our favorite artists and songs in a single package. Grade: A+ (Trojan Records/BMG, released June 8, 2018)