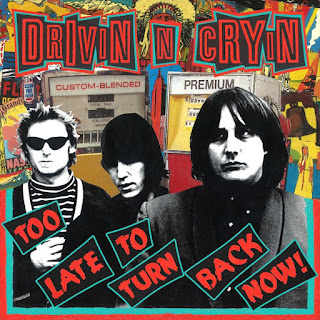 Back in 1997, Atlanta-based Southern rockers Drivin’ N Cryin’ were coming off a seven-year major label run that saw the critically-acclaimed band record four albums for Island Records (including 1990’s classic Fly Me Courageous) and a single disc for Geffen Records (the very fine Wrapped In Sky). Finding themselves dropped back into the indie-rock trenches, the trio – singer, songwriter, and guitarist Kevn Kinney with bassist Tim Nielsen and drummer Jeff Sullivan – signed with hometown label Ichiban Records for a self-titled one-off album.

Formed in 1985, Ichiban Records originally specialized in blues and R&B artists like Clarence Carter, Little Johnny Taylor, and Raful Neal while, in the 1990s, they branched out into hip-hop with albums by rappers like Sir Mix-A-Lot, Gangsta Pat, Detroit’s Most Wanted, and (ugh!) Vanilla Ice. In between the two extremes, the label dabbled in indie rock, releasing albums by well-regarded bands like Dash Rip Rock, the Fleshtones, and Drivin’ N Cryin’. By the end of the decade, however, the label was in bankruptcy and the bulk of back catalog of recordings - including that self-titled Drivin’ N Cryin’ album – have been long out-of-print.

Kevn Kinney and Drivin’ N Cryin’ continue to rock ‘n’ roll, though, touring steadily and releasing a series of EPs between 2012 and 2014. The band continues to pick up new fans for its gritty, uncompromising hard rock sound, and although its back catalog of music is mostly in shambles, a lot of it is still available as used discs in various conditions. For the hardcore D’N’C fan, however, here’s some good news – on July 27th, 2018 New West Records will reissue that long-lost self-titled Drivin’ N Cryin’ album on both CD and 140-gram black vinyl.

Retitled Too Late To Turn Back Now, the album was originally produced at Casino Studio in Atlanta by the legendary Kosmo Vinyl (The Clash), who also contributed the snazzy new cover artwork for this reissue. With little or no label promotional budget when it was first released, the album gained little traction on the charts and received meager airplay beyond the band’s raucous cover of John Denver’s “Leaving On A Jet Plane,” which excited FM radio listeners in Alabama for some reason. The material has been remastered for this reissue, and the album will appear on vinyl for the very first time. A truly overlooked album by one of rock’s best, albeit underappreciated bands, Too Late To Turn Back Now is a long-missing chapter in the ongoing Drivin’ N Cryin’ saga.

Buy the vinyl from Amazon.com: Drivin’ N Cryin’s Too Late To Turn Back Now
Posted by Rev. Keith A. Gordon at Sunday, July 01, 2018