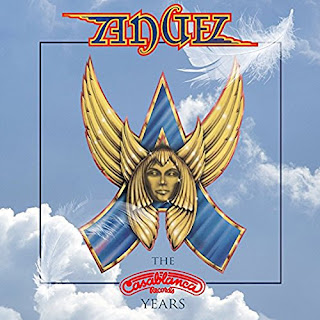 It was these five ambitious young men that recorded the band’s self-titled 1975 debut. Originally positioned by their label as a too-late-to-the-party glam band, Angel was dressed entirely in white (as compared to their stablemates Kiss, who were clad in black). Thankfully, because of DiMino’s hardy vocals, Meadows’ explosive fretwork, and Giuffria’s innovative keyboard playing, Angel would transcend their label’s marketing to make some great music. Helluva Band followed in 1976, with On Earth As It Is In Heaven coming a year later and peaking at #77 on the album charts. Jones left the band, to be replaced by Felix Robinson in time for White Hot.

The aptly-titled White Hot album was released in 1978, yielding a minor radio hit (#44 on the Billboard charts) with the band’s raucous cover of the Young Rascals’ song “Ain’t Gonna Eat Out My Heart Anymore.” Cracks had begun to form in the partnership, though, and by the time of the band’s 1979 album Sinful (originally titled Bad Publicity and released with a different cover before being replaced), the band had clearly run its course (although Sinful did sneak onto the album’s chart, rising to #159). The 1980 set Live Without A Net would prove to be the band’s swansong, with DiMino and Meadows leaving the band in 1981.

Angel were true pop-metal pioneers, easily a decade ahead of their time, and on August 31st, 2018 the band will finally get its due when Caroline Records/Universal Music releases Angel: The Casablanca Years, a seven-disc CD box set comprised of the Angel’s previously-mentioned albums as well as a bonus disc with mono song mixes and rare songs that only appeared on soundtrack albums from movies like 1980’s Foxes. Writer and Angel expert Dave Reynolds has penned new liner notes for the set, which are included in a 28-page booklet featuring rare photos and Angel memorabilia.

Frank DiMino reformed Angel in 1998 with drummer Barry Brandt, and has toured sporadically since. Gregg Giuffria led his own band during the 1980s (Giuffria), enjoying modest chart success during the “hair metal” years, and later formed the equally-successful outfit House of Lords, which released a pair of albums in the late ‘80s. Jones sadly passed away in 2009, and Punky Meadows recently returned from a hiatus from music of 13 years, during which he owned and operated a tanning salon. The guitarist released his critically-acclaimed solo debut, Fallen Angel, in 2016. Meadows will be joining DiMino and Angel this year for tours of the U.S. and the U.K. in support of the new box set.

Buy the box set from Amazon.com: Angel The Casablanca Years