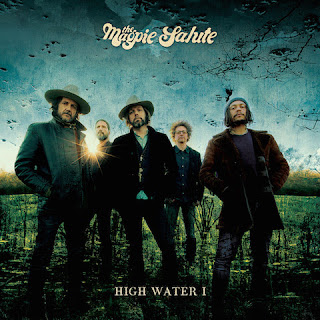 When the Black Crowes finally split up for good after eight studio and five live albums released over a quarter-century and selling better than 30 million records, band founders and (feuding) brothers Chris and Rich Robinson went their separate ways. Band frontman Chris picked up with his solo project, the Chris Robinson Brotherhood, which has been relatively prolific with a trio of well-regarded albums to the band’s credit. Guitarist Rich has pursued a solo career with mixed results, releasing his fourth solo record, Flux, in 2016. The same year, Robinson formed the Magpie Salute with former Crowes’ members Marc Ford (guitar) and Sven Pipien (bass).

Although Chris Robinson has unfairly dismissed his younger brother’s efforts as a glorified Black Crowes cover band (yes, they do perform songs by Robinson’s former band as well as material from Robinson and Ford’s solo albums). However, I think that Chris is missing the boat here (full disclosure…I’ve run into conflict with Chris before and, well, don’t think much of him as a person). The Magpie Salute’s 2017 self-titled live album was not dissimilar to the Black Crowes (sans Chris’s Steve Marriott-styled vox), showcasing heavier guitars and a sonic identity that falls somewhere between Gov’t Mule and the Allman Brothers Band. The album included inspired covers of songs by Delaney & Bonnie, Pink Floyd, Bob Marley, and Ronnie Lane as well as a smattering of tunes by Robinson.

On August 10th, 2018 the Magpie Salute will release their debut studio album, High Water I, via Eagle Rock Entertainment in the U.S. and the Mascot Label Group in Europe. High Water I will be released on both CD and as a two-disc set on blue and white splatter vinyl. The band is currently comprised of Robinson, Ford, and Pipien along with vocalist John Hogg, keyboardist Matt Slocum, and drummer Joe Magistro. The album’s first single is “Send Me An Omen” (check out the video below), of which Robinson, in a press release, says “wraps up all of the elements of this band. There’s pure rock ‘n’ roll juxtaposed with these pop melodies sung with a melancholy that creates this beautiful balance of surreal dark and light.”

High Water I was produced by Robinson and recorded at Dark Horse Studios in Nashville. The twelve-track collection is said to “represent a musical union of swaggering rock ‘n’ roll, psychedelic blues, and campfire-worthy storytelling” (according to press release hype), and while I haven’t heard it (yet), I enjoyed the band’s self-titled debut so I’m certainly looking forward to hearing this one. The band has plans to release a second studio set, High Water II, at some point in 2019 but in the meanwhile they’ll be hitting the asphalt this summer to spread their musical gospel to a stage near you (tour dates can be found on the band’s website).

Buy the CD from Amazon.com: The Magpie Salute’s High Water I