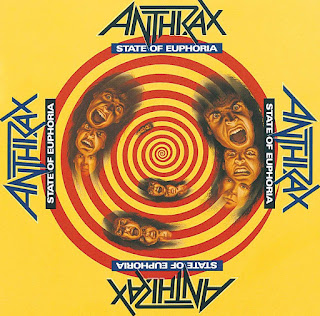 New York City’s own Anthrax is widely considered to be one of the leading thrash-metal bands of the decade of the ‘80s, one of the “Big Four” along with Metallica, Megadeth, and Slayer to change the musical currents and influence a generation of hard-rockin’ bands to follow. Since releasing its earth-shaking debut album Fistful of Metal in 1984 on the pioneering Megaforce label, Anthrax has gone on to release eleven studio and six live albums.

Anthrax benefited from a distribution deal that Megaforce signed with Island Records, the increased availability of the band’s music allowing their third album, 1987’s Among the Living, to reach a wider audience that was already growing due to their explosive, uncompromising live performances. Among the Living earned the band a Gold™ Record for 500k+ in sales and set the stage for the band’s 1988 release, State of Euphoria. The band’s fourth studio effort, State of Euphoria would hit #30 on the U.S. charts and #12 in the U.K. – no mean feat for a thrash-metal outfit – and earn Anthrax their second Gold™ Record.

On October 5th, 2018 Island Records/UMe will reissue a 30th anniversary deluxe edition of Anthrax’s State of Euphoria. A two-disc set, the reissue will feature the remastered original album and all of the B-sides originally released with the singles from State of Euphoria, as well as a 1989 live performance of the song “Antisocial” from the Hammersmith Odeon in London. The second disc, “Charlie’s Archives,” was curated by the band’s drummer and archivist Charlie Benante, who specifically chose the material to display the evolution of the album’s songs. “We recorded everything back then,” says Benante in a press release for the reissue. “We would sit in the rehearsal room with a little two-track machine; record everything we did in rehearsal while we were putting the songs together.”

The State of Euphoria reissue includes a 20-page booklet with liner notes by British music journalist Alexander Milas, the former editor-in-chief of Metal Hammer magazine. The package also features previously-unpublished photos of the band and memorabilia from the period including magazine cover art and advertising. Also, Benante went on social media and asked that the band’s fans to comment on the album, stating “I think fans will be really excited when they see their own quotes in the package.”

Aside from the two-CD set, State of Euphoria will also be reissued as a double-vinyl set on black wax and as a limited edition red and yellow-colored vinyl set. “State of Euphoria is the album that we always felt we never got to finish properly” says Benante. “We wished we had had a little more time to spend on it. But, having revisited it while putting together this package, I really got to enjoy it again, it took me back to that time when everything was a whirlwind.”

Buy the CD from Amazon.com: Anthrax’s State of Euphoria
Posted by Rev. Keith A. Gordon at Sunday, September 16, 2018