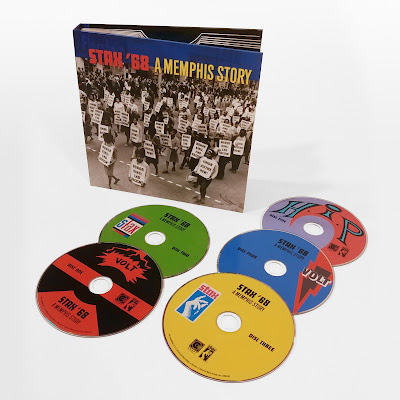 We’ve written about the legendary Stax Records label on That Devil Music.com before. At a time when the music industry was centered on the coasts, the Stax label put Memphis soul on the map in the mid-to-late ‘60s with influential and innovative records by giants like Sam & Dave, Rufus Thomas and his daughter Carla, Otis Redding, and Booker T & the M.G.’s. As they approached the decade of the 1970s, the label branched out into blues music with essential recordings by guitarist Albert King and they pioneered ‘70s soul and funk with groundbreaking releases by the great Isaac Hayes. In our house, there’s no such thing as too much music from Stax Records.

Stax Records, now owned by the Concord Music Group, celebrated its 60th anniversary last year with a slew of archival releases including vinyl reissues of vintage LPs by Otis Redding and Carla Thomas; a four-disc Isaac Hayes box set; and individual “best of” CDs by some of the label’s biggest stars. The celebration has continued into 2018 and on October 19th, Craft Recordings, Concord’s archival imprint, will release Stax ’68: A Memphis Story, a five-disc box set that offers the A- and B-sides of every single released by the label during that tumultuous year. The set also includes a 56-page book with in-depth liner notes by writers Robert Gordon, Andrea Lisle, and Steve Greenberg as well as rare and previously-unpublished photos.

More important is the music – more than 120 songs spread across the five CDs – featuring both some of Stax’s marquee stars like Redding, Hayes, William Bell, Johnnie Taylor, Eddie Floyd, and the Staple Singers but also from underrated talents like Mable John, Linda Lyndell, the Soul Children, and the Mad Lads. The year was a tough one for Stax, which had lost its distribution deal with (and control of the label’s back catalog to) Atlantic Records. The assassination of Martin Luther King, Jr. in Memphis had a profound effect on the label’s multi-racial roster of musicians, and Stax was already reeling from the December 1967 death of the great Otis Redding. 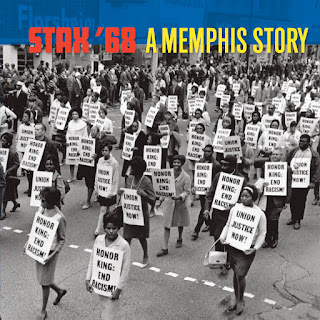 Considering the enormous track listing for the Stax ’68: A Memphis Story box, I’m amazed at the sheer amount of great music Stax released over the course of the year. While not all of the singles were huge hits, they were all of uniformly high quality. Of course, there are the ‘heavy hitters’ – songs like Otis Redding’s posthumous hit “(Sittin’ On) The Dock of the Bay,” Sam & Dave’s classic “I Thank You,” Johnnie Taylor’s smooth-as-silk hit “Who’s Makin’ Love,” and Albert King’s fiery “Blues Power” – but there are also faintly-remembered tunes like Booker T & the M.G.’s “Soul Limbo” and Carla Thomas’s “A Dime A Dozen.” The box set also includes long-lost material by folks like the Memphis Nomads, the Bar-Kays, Shirley Walton, Judy Clay, Billy Lee Riley, and the Epsilons as well as rock ‘n’ roll by cult band Southwest F.O.B. and the first recordings by Delaney & Bonnie and Bobby Whitlock (Derek & the Dominoes).

The Stax ’68: A Memphis Story box retails for roughly $70 (less for a downloadable digital version) but is also available in various “deluxe bundles” from the Stax Records online store. Ranging in prices up to $120, you can get bundles with a cool letter-pressed vintage poster, Stax hat and t-shirt, or all of the swag in the “Superb Bundle.” The release of Stax ’68: A Memphis Story coincides with two exhibits opening at the Stax Museum of American Soul Music in Memphis, Tennessee – “The Sound of ’68” and “Give A Damn! Music + Activism at Stax Records.” Details on both exhibits are available from the museum website.

Buy the box set from Amazon.com: Stax ’68: A Memphis Story