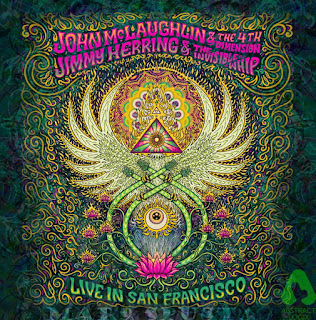 British guitarist John McLaughlin is an extraordinary talent who, for better than 50 years now, has both pushed the boundaries of jazz, rock, and blues music as well as transcended mere genre labels. McLaughlin was a member of various British bands throughout the 1960s, playing alongside legends like Alexis Korner, Georgie Fame & the Blue Flames, and the Graham Bond Organisation before releasing his first solo album, Extrapolation, in 1969.

That same year, McLaughlin moved to the states to play with the pioneering jazz-fusion band Tony Williams Lifetime, which brought him to the attention of jazz legend Miles Davis, who recruited the guitarist to play on visionary recordings like In A Silent Way and Bitches Brew. During the ‘70s, McLaughlin fronted the fusion outfit the Mahavishnu Orchestra, whose albums The Inner Mounting Flame (1971), Birds of Fire (1973), and Visions of the Emerald Beyond (1975) set the standard for innovative guitarplay.

Aside from Mahavishnu and a lengthy solo career that has yielded almost 20 recordings, McLaughlin fronted the late ‘70s band Shakti, collaborated with talents like Carlos Santana and Return to Forever’s Al Di Meola on albums, and lent his enormous six-string skills to records by the leading lights of 20th century music, including jazz giants Stanley Clarke and Wayne Shorter, rockers Jack Bruce (Cream) and James Taylor, and many others. McLaughlin has earned awards from publications like Down Beat and Guitar Player and has been lauded by fellow guitarists like Jeff Beck, Frank Zappa, Steve Morse, and Pat Metheny as an influential and evolutionary musician.

Sadly, every good thing must come to an end sometime, and last year the 76-year-old guitarist and band leader embarked on a farewell tour of the United States. Comprised of 25 concerts, McLaughlin invited a favorite guitarist of his, Jimmy Herring, and his band The Invisible Whip, to accompany him on his trek across the states. The tour concluded with a sold-out show at the Warfield Theatre in San Francisco, a venue last visited by the guitarist 36 years ago.

On September 21st, 2018 Abstract Logix will release McLaughlin’s Live In San Francisco on CD and vinyl. The album is an eight-song, 73-minute collection that features a nine-piece band including members of The Invisible Whip and The 4th Dimension performing material that McLaughlin created with the Mahavishnu Orchestra some four decades ago. The final show of the “Meeting of the Spirits Tour,” the concert documentary features performances of classic McLaughlin songs like “Birds of Fire,” “The Dance of the Maya,” “Earth Ship,” and “Eternity’s Breath.” McLaughlin hasn’t lost a step through the years, and his crystalline playing of these legendary songs is sure to appeal to both Mahavishnu Orchestra fans and jazz-fusion aficionados alike. You can check out the complete track listing for Live In San Francisco below.