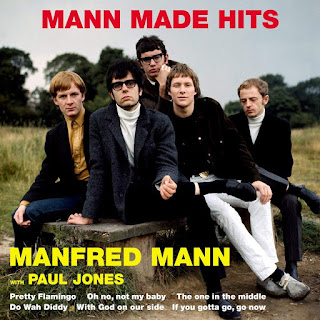 It’s a memorable scene from the hit 1981 movie Stripes, a military comedy starring Bill Murray, Harold Ramis, and John Candy. The platoon, in a full-gear march, is led in cadence by Ramis’s character with a version of Manfred Mann’s 1960s-era hit “Do Wah Diddy Diddy.” The scene is so memorable that, during my own short stint in the military, our platoon marched to the mess hall to “Do Wah Diddy Diddy” when left on our own at the Fort Leonard Wood reception center over a long holiday weekend. Manfred Mann, named for band keyboardist Mann, was one of the first ‘British Invasion’ bands to find an audience in North America. While the band’s stateside commercial success was sporadic and largely dependent upon the strength of their then-current single release, Manfred Mann nevertheless enjoyed a string of U.K. chart hits between 1964 and the band’s break-up in 1969.

As was frequently the practice in the ‘60s, different versions of the band’s albums were released on the two continents, with the U.K. versions representing the ‘true’ album and U.S. releases generally ‘frankensteined’ together from a band’s singles, EPs, and album tracks. By way of example, Manfred Mann’s first U.K. album was the stellar 1964 release The Five Faces of Manfred Mann, which displayed the band’s blues and R&B roots with a mix of solid originals and covers of material by revered artists like Howlin’ Wolf, Muddy Waters, and Bo Diddley. Manfred Mann’s debut U.S. album, the imaginatively-titled The Manfred Mann Album, took eleven songs from the band’s U.K. debut and tacked on the chart-topping hit single “Do Wah Diddy Diddy.” An album titled The Five Faces of Manfred Mann was subsequently released stateside in 1965, but it only had two songs in common with its British doppelganger. Got all that?


The band’s proper sophomore effort, titled Mann Made, was released in 1965 in both the U.K. and the U.S., where it was the band’s fourth (!) studio album, and they shared a lot of songs between them. Singer Paul Jones and guitarist Mike Vickers both left the band in early 1966, and EMI’s His Master’s Voice imprint, which had enjoyed significant sales with Manfred Mann, dropped the band but kept singer Jones on contract, feeling that he was the real ‘star’ of the outfit. Whereas Jones subsequently scored a handful of hits – most notably 1966’s “High Time” and the following year’s “I’ve Been A Bad, Bad Boy” – he would split his time between music and acting from the late ‘60s well into the ‘70s before becoming a popular British radio and TV personality.

Meanwhile, Manfred Mann moved bassist Tom McGuinness to guitar, added singer Mike d’Abo and bassist Klaus Voorman (after the legendary Jack Bruce kept the seat warm for a few months), signed a new deal with Fontana Records, and continued to chalk up hit singles for the next couple of years. After Jones’ departure from the band, however, EMI played a number of dirty tricks on Manfred Mann, first cashing in with a quickie EP of early, unreleased songs titled As Was (designed to be confused with the band’s first post-Jones LP, As Is). Then they used session players to complete an unfinished Manfred Mann song, “You Gave Me Somebody To Love,” which featured Jones on vocals, the single hitting #36 on the U.K. charts despite the band officially disowning the release.


In a move that would be duplicated numerous times over the years by different record labels exploiting other bands, EMI released a ‘posthumous’ compilation album of the band’s singles and album tracks titled Mann Made Hits. In this case, however, the label really did fans a favor by collecting all this material together under one roof. Billed as “Manfred Mann with Paul Jones,” Mann Made Hits provides the perfect bookend to Jones’ successful years with the band. Across fourteen tracks, the album showcases the many facets of the band’s talents as well as its enormous musical chemistry, with songs running the stylistic gamut from ‘60s pop, rock, and jazz to American blues and folk music. Manfred Mann’s big cross-continental hits are all here – the love-struck yearning of “Pretty Flamingo” (#1 U.K./#29 U.S.), the band’s breakthrough rocker “Do Wah Diddy Diddy” (#1 U.K./#1 U.S.), the poppy singalong “Sha La La” (#3 U.K./#12 U.S.), and the soulful ballad “Come Tomorrow” (#4 U.K./#50 U.S.).

But there are a lot of great songs on Mann Made Hits that will be unfamiliar to even the most avid Anglophile. There are those British singles that never sailed across the Atlantic, fine songs like the revved-up rocker “5-4-3-2-1,” which would become the band’s first Top 10 U.K. hit and the theme song for the popular British TV show Ready Steady Go. The band’s first flirtation with the Bob Dylan songbook, a faithful cover of the Bard’s country-flavored “If You Gotta Go, Go Now,” hit #2 on the U.K. charts while their reading of Dylan’s haunting “With God On Our Side” is, perhaps, the definitive recording of the song, Jones’ emotional vocals accented by Mann’s reverent piano accompaniment and swelling instrumentation. A couple of Jones’ original songs stand out, notably the self-referential “The One In The Middle,” a strutting R&B-styled rocker with swagger to spare, and the blues-infused “I’m Your Kingpin,” which features Jones’ subtle harmonica-play, jazzy free-form piano, and Mike Hugg’s shimmering vibes.


The band that recorded much of the material found on Mann Made Hits – singer Jones, keyboardist Mann, talented guitarist/bassist Tom McGuinness, guitarist Mike Vickers, and drummer Mike Hugg – essentially ceased to exist by the time of the album’s release. But the music they made together has proven to be timeless, and if they’re not as well-known as other British Invasion bands like the Beatles, the Kinks, and the Rolling Stones, Manfred Mann nonetheless left their mark on the decade’s pop-rock firmament. The band members recently formed their own Umbrella Music label to reissue these early albums on CD, and the U.K. versions of these albums, including Mann Made Hits, are readily available online.

As for the band members’ future endeavors, as mentioned above, Paul Jones became a British radio and TV personality while also fronting the popular U.K. act The Blues Band (which also included Manfred Mann guitarist Tom McGuinness). Manfred Mann, the band, soldiered on until 1969, their last big hit a chart-topping cover of Dylan’s “The Mighty Quinn.” Manfred Mann, the musician, formed the short-lived jazz-rock band Manfred Mann Chapter Three with Mike Hugg, releasing a pair of albums in 1969 and 1970 before forming Manfred Mann’s Earth Band in 1971. A prog-rock oriented outfit with pop-rock undercurrents, the Earth Band carries on to this day, but found modest success throughout the late ‘70s and early ‘80s with albums like The Roaring Silence (1976), Watch (1978), and Somewhere In Africa (1983), among many others…but that’s a story for another time. Grade: A (Umbrella Music, released July 6, 2018)

Buy the CD from Amazon.com: Manfred Mann’s Mann Made Hits