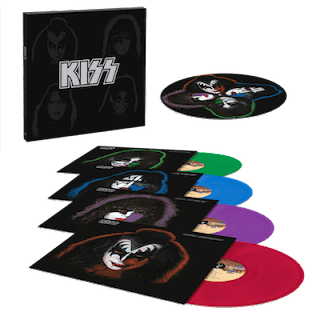 It was 40 years ago this month when each of the four founding members of Kiss – Paul Stanley, Ace Frehley, Gene Simmons, and Peter Criss – all released self-titled solo albums on the same day in September 1978. While critical assessment on the albums was mixed (Ace and Paul good, Gene and Peter not so much), the band was riding a wave of popularity and commercial success in the wake of their 1977 Top Ten album Love Gun, which helped push three of the four solo albums into the Top 40 on the charts with all four subsequently selling better than a million copies each.

On October 19th, 2018 Casablanca Records and UMe will be reissuing all four of these Kiss solo efforts on 180-gram vinyl as a four-disc limited edition box set as KISS: The Solo Albums – 40th Anniversary Collection. The set is available in a limited run of 2,500 copies and is available exclusively through the band’s web shop or from The Sound of Vinyl website, both of which are now taking pre-orders. Each heavyweight vinyl LP has been assigned a unique color matching its associated cover art – Gene Simmons on red vinyl, Paul Stanley on purple wax, Ace Frehley on blue vinyl, and Peter Criss in green – and the four LPs are packaged in a deluxe black-matte slipcase featuring glossy black images of the four band members’ face surrounding a silver-foil print of the Kiss band logo.

KISS: The Solo Albums – 40th Anniversary Collection also includes four 12”x12” posters of each album’s cover art, as well as an exclusive turntable slipmat with all four of artist Eraldo Carugati’s painted album-cover faces connected together. Odds are good that the hardcore Kiss faithful already have these albums, probably on both vinyl and CD, but to sweeten the pot the band has put together a pricey $300 collectors’ bundle that includes the aforementioned box set and paraphernalia along with a limited-edition tee-shirt, Kiss buttons, and a set of pretty cool-looking Kiss coasters that is limited to 300 sets. Caveat emptor, indeed…
Posted by Rev. Keith A. Gordon at Tuesday, September 25, 2018