The Blues Foundation and Rolling Stone magazine are both reporting on the death of Chicago blues legend Otis Rush, who passed away on Saturday, September 29th, 2018 from complications arising from a stroke the guitarist suffered in 2003. Rush was 84 years old and had been unable to perform for several years.

Otis Rush is revered by hardcore fans, but is virtually unknown outside the blues world. This in spite of the fact that his unique guitar style and hearty, soulful voice influenced a generation of blues artists and would factor heavily in the sound of rockers like Eric Clapton, Peter Green, Michael Bloomfield, and Stevie Ray Vaughan, among many others. Indifferent or underfunded record labels and bad contracts, erratic behavior, mediocre live performances, and poor management have prevented Rush from taking his rightful place as one of the greats of the Chicago blues.

Born and raised in Mississippi, the left-handed Otis Rush learned the rudiments of blues harp and guitar, which he played upside down, while still a youth. Rush moved to Chicago in 1948 and, inspired by the electric Delta blues of Muddy Waters and Howlin’ Wolf, was performing in South Side and West Side clubs by the age of 20. Rush’s expressive fretwork and powerful vocals brought him to the attention of Willie Dixon, who signed the guitarist to Cobra Records.

Rush hit it out of the ballpark with his first side for Cobra, “I Can’t Quit You Baby” quickly rising to #6 on the Billboard magazine R&B chart in 1956. Subsequent singles for the label performed nearly as well, songs like “Double Trouble,” “All Your Love,” and “My Love Will Never Die” becoming staples of Rush’s live show for decades and, along with fellow guitarists Magic Sam and Buddy Guy, Rush helped to define and popularize the West Side Chicago blues sound.

When Cobra Records went bankrupt in 1959, Rush followed his producer Dixon over to Chess Records. The label recorded eight songs on the guitarist between 1960 and ‘62, but only released one lone single, the classic “So Many Roads, So Many Trains.” Dismayed by the lack of support from Chess, Rush jumped to rival Duke Records, which also released just one single, the houserockin’ “Homework” (later covered by the J. Geils Band). Although his fortunes in the recording studio were waning, Rush’s live performances were in high demand, and he toured Europe with the American Folk Blues Festival.

In 1965, Rush had the rare good luck to have five songs included on Vanguard’s seminal Chicago/The Blues/Today! compilation album, which brought the guitarist’s unique sound to an appreciative rock music audience. Guitarist Mike Bloomfield, of the Paul Butterfield Blues Band, convinced his manager Albert Grossman to take Rush on as a client. With a deal from Atlantic Records’ Cotillion subsidiary in their pocket, Bloomfield and fellow blues-rock guitarist Nick Gravenites produced Rush’s Mourning For The Morning album in 1969. The pair failed to capture the guitarist’s incendiary performance style on tape and when the album suffered from lackluster sales, the label dropped Rush. 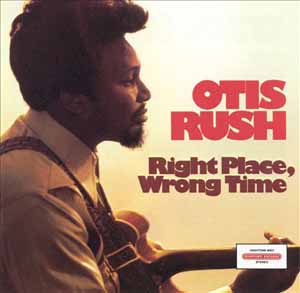 Undaunted, Grossman grabbed a deal for the guitarist with Capitol Records, and Gravenites went back into the studio with Rush in 1971 to record Right Place, Wrong Time, widely considered to be Rush’s best album. Not liking what they heard, the label refused to release the album, and it sat on a shelf until the independent Bullfrog Records bought the rights and released it in 1976. By this time, however, the allure of the blues for white rock audiences had fallen by the wayside, and the album sold few copies.

Rush recorded the unspectacular Cold Day In Hell for Delmark Records in 1975, but recording sessions became few and far between for the bluesman well into the 1980s, and he made a living through club performances and the odd festival appearance. Rush retired from music for a while in the early 1980s, but by mid-decade he was back in the saddle, using questionable pick-up bands for performances outside of Chicago.

Rush’s reputation took a hit during the 1980s as the guitarist displayed increasingly erratic behavior and delivered mediocre performances with substandard bands, many of which were later released on vinyl and compact disc by exploitative fly-by-night labels. By 1994, though, Rush had seemingly tightened up his game, and he recorded the inspired Ain’t Enough Comin’ In with noted producer John Porter, his first studio album in sixteen years.

Rush released what might be the final studio album of his career in 1998, Any Place I’m Goin’ receiving widespread critical acclaim and earning Rush his first and only Grammy® Award for “Best Traditional Blues Album.” Rush toured steadily throughout the 1990s and into the ‘00s until suffering a stroke in 2003 that put the Chicago blues legend on the sidelines for good. Rush’s Live...And In Concert From San Francisco was released in 2006, the album capturing an above-average 1999 performance by the underrated Chicago blues legend.

Often overshadowed by contemporaries like Buddy Guy and Magic Sam, Otis Rush’s influence nevertheless can be heard in the music of current Chicago bluesmen like Dave Specter and Nick Moss. Inducted into the Blues Hall of Fame in 1984, Rush made a rare public appearance in June 2016 at the Chicago Blues Festival when the city declared June 12th to be “Otis Rush Day.” Ranked a measly #53 on Rolling Stone magazine’s list of “100 Greatest Guitarists” list, Otis Rush’s music and incredible tone will endure and continue to inspire generations of guitarists to come.