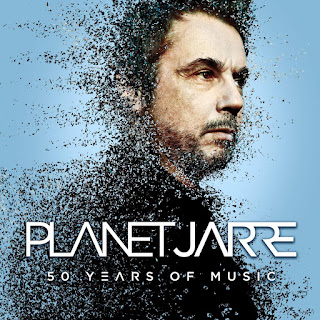 Electronic music enthusiasts comprise the kind of niche group that generally knows all the inputs and outputs regarding its genre of choice, so there's probably not a lot that a reviewer can hope to do in terms of educating them regarding the pros and cons of this 4-disc overview of French composer and performer Jean-Michel Jarre. (A flurry of online fan posts confirms this, in fact.) There are, however, fans whose familiarity is centered upon Jarre’s first two non-soundtrack albums, the hugely successful Oxygène (1976/1977) and Équinoxe (1978).

Jarre has certainly proven his ability to evolve and stretch his sound in the years that followed, but his career-defining breakthrough albums nonetheless formed the foundation for his entire body of work. Planet Jarre’s 41 tracks are arranged non-chronologically, bringing to mind the creative sequencing of Pink Floyd’s career-spanning Echoes collection. But while Floyd’s condensed oeuvre presents the juxtaposition of near-outrageous extremes (and a host of songwriters), Planet Jarre largely possesses a cohesion made possible by the artist’s longstanding vision for an orchestral approach to synthesizer music.

Those who know Jarre’s music only casually, based on his early commercial success, likely have no sense of his subsequent significance in the electronic genre; those who have followed the artist closely are likely aware that Jarre was active for the better part of a decade, learning his craft and creating music for soundtrack and background applications before emerging into the mainstream and finding massive, near-immediate exposure. While hardly the first electronic musician to hit the charts, Jarre had the musical goods to challenge his predecessors: unlike the interpretations of existing works electronically realized by Tomita and Walter/Wendy Carlos, Jarre offered original pieces with album-length compositional depth.

Rich in their melodies, themes, textures, and sonic innovations, his pieces set themselves apart from Kraftwerk’s spartan and likeably nerdy synth-pop tweedlings and Tangerine Dream’s pensive, trance-inducing explorations, while still mirroring various aspects of their work. Fans of the aforementioned Krautrock synth pioneers may find Jarre a bit too rich and elaborate for their tastes, and yet Planet Jarre demonstrates that, in the midst of constructing his synthesized symphonettes, he can indeed muster up ethereal atmospheres and robotic rhythms a la his German contemporaries.

This particular Jarre compilation differs from previous entries in that it presents four individual playlist-styled sections, each representing a particular element of his work: soundscapes, themes, sequences, and experimentation. With all but a couple tracks here available elsewhere, it would be possible for any Jarre-head to assemble something similar, though not directly from the mind of the artist himself, who — while pondering approaches for assembling this sprawling collection — evidently had an epiphany about the multiple layers within his compositions. That burst of inspiration did not, however, include formatting choices designed to accommodate his most fervent followers.

With two box-set versions available (one on limited-edition vinyl and one comprised of two CDs and two cassettes) and a double-CD set that partially spoils the four-playlist effect by pairing them on its two discs, only those with a turntable can experience the intended quartet of playlists in a single format (unless they’re willing to copy and burn the original track list to four separate discs). Even more curious is the fact that the 5.1 surround-sound content (confusingly including tracks not otherwise included on the collection) is made available only via a download card included in the box sets, not in a more conventional and convenient (not to mention appropriately audiophile-ready) format such as DVD or Blu-Ray.

While we’re in complaint mode, it’s worth adding that the “50 Years-of Music” concept behind Planet Jarre is something of a stretch: The first track here, the debut single and utter flop “La Cage,” was recorded in 1969 but not released (and subsequently ignored) until 1971. Even if you count the year of origin, and that in itself is pushing it, your handy abacus will tell you that doesn’t add up to a 50th anniversary. That said, the extremely inaccessible and downright clunky track (and others of similar vintage and avant-garde vibe on the fourth disc) is a minor revelation for the still-uninitiated, demonstrating how far Jarre moved the then-stuffy and academic electronic genre toward musicality and mainstream viability within about a half-dozen-year span. That fourth disc, loaded with examples of Jarre’s least-accessible work, offers comparatively little insight into his overall compositional makeup, though it does help complete the story of his career for those who wish to delve into every chapter.

Evidence that the career-defining Oxygène remains the artist’s calling card du jour is offered in the six sections of that extended work featured here, half of them drawn from the original 1976 album and half from the two sequels released between 1997 and 2016. Still, this overview of the synthetic sphere spinning under Jean-Michel Jarre (its multi-format fiasco notwithstanding) is a fairly comprehensive and well-organized one. And while Oxygène might be a dominant element in his sometimes peculiar world, Planet Jarre proves that there’s more than that on the table. (Sony Records, released September 21, 2018)