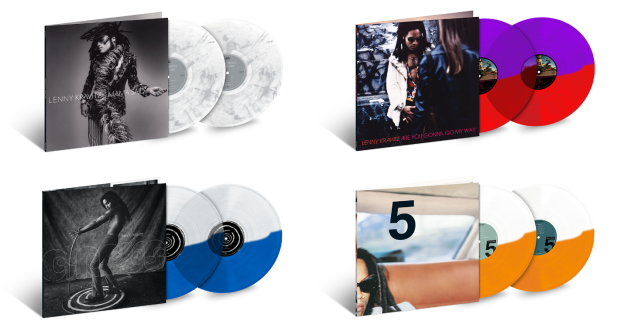 Virgin Records and UMe have announced a September 21st, 2018 release date when four of rocker Lenny Kravitz’s first five albums will be reissued on both glorious black vinyl and as individualized, limited-edition colored wax versions. The four albums – 1991’s chart breakthrough Mama Said, 1993’s Are You Gonna Go My Way, 1995’s Circus, and 1998’s 5 – collectively sold better than eight million copies stateside and yielded hits like “It Ain’t Over ‘til It’s Over,” “Are You Gonna Go My Way,” “Believe,” and “Fly Away.” Kravitz’s 1989 debut album, Let Love Rule, will be reissued on vinyl on November 30th.

Each album will be released as a two-disc set and four of the five also feature non-album bonus tracks, many of which are appearing on vinyl for the first time. The colored wax versions of the albums are all different – Let Love Rule is 50/50 semi-transparent brown and yellow, Mama Said is marbled white and gray, Are You Gonna Go My Way is transparent red and purple, Circus is solid white and clear transparent, and 5 is solid orange and white.

Kravitz’s first five LPs made the singer, songwriter, and guitarist one of the 20th century’s last big rock stars (along with the White Stripes’ Jack White). Kravitz’s unique throwback hybrid of rock, blues, soul, and funk, all delivered with a heavy psychedelic influence, earned him a reputation as one of the decade’s most engaging artists, and he won the Grammy™ Award for “Best Male Rock Vocal Performance” four years in a row from 1999 to 2002. Much like the late, legendary Prince – the closest comparison to Kravitz that you could justifiably make – Kravitz frequently played all the instruments on his albums himself while recording.

Whether you spend your hard-earned cash on the plain black versions of these Kravitz reissues or cough up for the colored variations, there’s no argument that it will be good to have these albums back on vinyl for the first time in over 20 years.